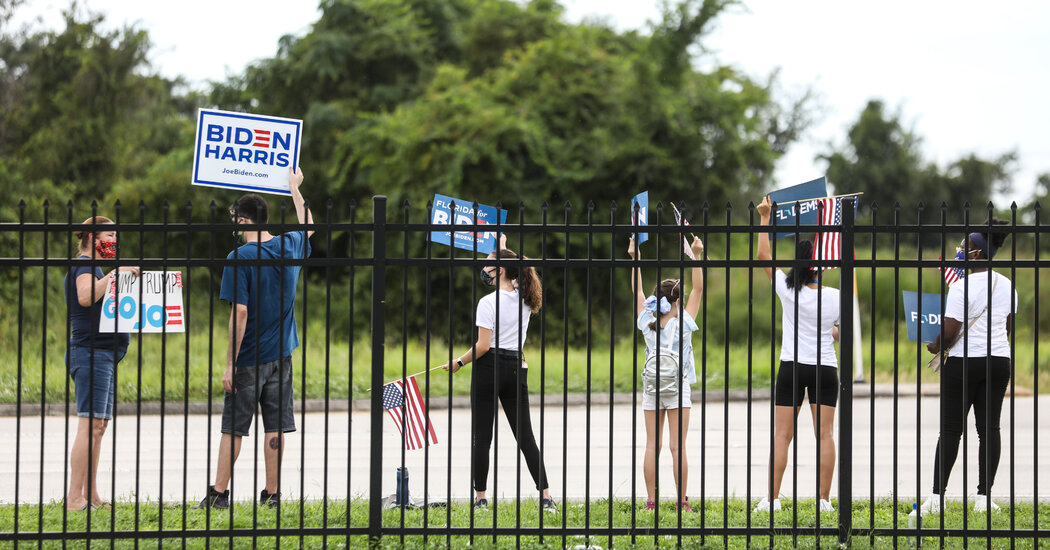 
[Follow our live coverage of the 2020 election between President Trump and Joe Biden.]

There is scant physical evidence that the former vice president and Democratic nominee is in town. His visits are scarcely publicized beforehand, logistical details are closely held and his event venues serve as much as video studios as places of gathering. Barely anyone is allowed near the candidate.

“I had to call an editor friend of mine at The Tampa Tribune to find out where he’d be,” said Rita Fox, a supporter of Mr. Biden’s from St. Petersburg, Fla. She stood across the street from Raymond James Stadium, home of the Tampa Bay Buccaneers, and near an entrance to Hillsborough Community College, where Mr. Biden was holding a veterans round-table event last week before about a dozen sanitized and socially distanced guests in a gymnasium whose bleachers remained folded up against the walls. No pull-asides, touching of the candidate or photos were permitted.

These measures are taken to ensure maximum protection against the coronavirus, Mr. Biden’s campaign said. The productions also serve a strategic voter-outreach purpose, as they will typically draw significant local news coverage and be viewed online by tens of thousands of voters. And they comport with the general philosophy of a campaign that has ceased nearly all traditional means of in-person outreach, including door-knocking, mass distribution of signs and big rallies.

As Mr. Biden has resumed campaigning in key battlegrounds, his visits have acquired a distinctly stealthy quality. This can be jarring for a candidate whose zeal for face-to-face campaigning, wading into crowds and lingering on rope lines is well known.

“There is no more of a shake-your-hand, pat-you-on-the-back kind of guy than Joe Biden,” said Rick Bloomingdale, the president of the Pennsylvania A.F.L.-C.I.O., who joined Mr. Biden during a Labor Day visit to Harrisburg, Pa. “This has to be killing him.”

Mr. Biden is campaigning on the point that his dedication to staying away from his supporters is proof he cares about them — and that President Trump’s insistence on holding rallies shows he cares only about himself. “The folks who come are packed in tight as they can be, risking disease, mostly without masks,” Mr. Biden said of Mr. Trump’s rallies during an appearance of his own on Monday at an aluminum manufacturing facility in Manitowoc, Wis. “But not Trump. He safely keeps his distance.”

Still, Mr. Biden’s minimal footprint on the ground tends to stoke anxiety among Democrats that their vehicle for defeating the president has a deficit in effort and enthusiasm, especially compared with an opponent whose big-splash approach (boat flotillas, fully resumed campaign events) is anything but reluctant.

The most obvious source of fanfare that greeted Mr. Biden’s first stop in Florida last week was from a loud cluster of about 50 Trump supporters who had gathered along Tampa Bay Boulevard. They outnumbered Mr. Biden’s supporters by about two to one and easily outshouted them, mostly without the encumbrance of masks.

Like their candidate, members of Mr. Trump’s contingent were quick to equate their loud presence with a broad appeal for the president — something they say the “fake news” media and nearly all pollsters will either ignore, miss or lie about. They also readily denigrated the “sleepy” demonstration down the block on behalf of Mr. Biden — or “Hidin’ Biden,” as one sign derided him.

In contrast, Mr. Biden’s supporters said they felt little need to announce themselves too aggressively and welcomed the Democratic nominee’s lower-key presence. “I like that he’s sleepy,” Ms. Fox said. “It would be nice to have a president that allows me to sleep at night.”

Little about this campaign has felt normal for anyone — for candidates, staff members, entourages or voters. But the contrast can be especially acute in the case of Mr. Biden, a once-dynamic stump campaigner who has always played off the energy of his crowds during his five decades in politics. His relish for in-person exchanges is well established, as is his knack for working rooms.

That has been virtually impossible to replicate from the tightly restricted bubble that cloisters the 77-year-old nominee. As the Democrats’ instrument of Mr. Trump’s removal, Mr. Biden is being treated as precious cargo — which itself can be disorienting.

“I’m a tactile politician,” Mr. Biden said last month upon announcing that he would be making a limited return to the trail after spending several months tethered mostly to his Delaware home. “I really miss being able to, you know, grab hands, shake hands. You can’t do that now.”

These are complicated times for a tactile politician. Mr. Biden, the habitual backslapper, glad-hander and enthusiastic hugger — whose campaign nearly imploded last year after several women accused him of “inappropriate touching” — might now be the most conspicuous practitioner of social distancing in America.

This has been no easy transformation, to say the least.

“I think it’s less about the podiums and the crowds than it is the rope lines for Joe — that’s what he misses,” said former Senator Christopher J. Dodd, Democrat of Connecticut and a close friend of Mr. Biden’s. “That’s where he makes his connections. He’s a face-to-face politician, and there’s not a lot of that now.”

How do you “bring the country together” while running a campaign that forbids nearly all togetherness? The awkwardness of this foray has been on display in recent weeks as Mr. Biden has dipped back into in-person campaigning across several battleground states.

“He is just a natural in-person connector,” said Representative Debbie Dingell, Democrat of Michigan, who spent time with Mr. Biden during his visit to her state this month. It is much harder to connect from behind a mask, much less a screen. “It’s an adjustment for everyone to campaign in a pandemic,” Ms. Dingell said. “But for Biden it’s more so.”

The Biden campaign says its pronounced concern for social distancing is geared mainly toward public safety.

“When we think about how we’re going to put together an event, the overarching concern is, How do we do this in a way that ensures we’re not posing a danger to the community?” said Kate Bedingfield, a deputy campaign manager. She added that, even in a traditional election year, a campaign would reach more voters through local news coverage of a visit than through people who laid eyes on the candidate in person.

Critics of Mr. Biden’s hyper-cautious approach have suggested that he can go too far at times, that some of his measures reek of showing off. Even after Milwaukee — the largest city in the swing state of Wisconsin — invested vast time and resources into the Democratic National Convention last month, the campaign declined to send Mr. Biden’s running mate, Senator Kamala Harris, to the state for even a quick courtesy appearance, despite the fact that the Democratic National Committee still maintained a scaled-back presence in the city. (“We determined this wasn’t a time to bring her to the state without creating an unsafe environment on the ground,” Ms. Bedingfield said.)

On Thursday night, Mr. Biden hosted a CNN town hall event in Pennsylvania in which voters were spread out in their cars, as if they were viewing a drive-in movie — a display that Mr. Trump promptly ridiculed at a rally that night in Wisconsin. “They’ve got cars, like cars that are parking,” Mr. Trump said. “It’s the weirdest thing I’ve ever seen. And CNN is going, ‘Oh, this is so beautiful, they have cars in a parking lot.’ What a deal.”

Even so, nearly every Biden supporter interviewed for this article endorsed this approach.

“We don’t have to come out in big loud mobs to prove our enthusiasm,” said Dave Finnegan of Celebration, Fla., who was standing in front of a 7-Eleven in Kissimmee, hoping to catch a glimpse of Mr. Biden’s motorcade as he arrived for a Hispanic Heritage Month event last Tuesday evening.

Mr. Finnegan, 78, held up a “Trump Lied, 200,000 Died” sign and said his primary beef with the president was over his handling of the coronavirus — particularly what he and others called Mr. Trump’s “superspreader events.”

Like other Biden supporters, Mr. Finnegan raised the example of Herman Cain, the pizza magnate, former Republican presidential candidate and supporter of Mr. Trump’s, who attended a rally for the president in Tulsa in June. Mr. Cain tested positive for the virus soon after the rally and died from its complications on July 30. (It remains unknown where Mr. Cain was infected; the editor of his website said he had done “a lot of traveling” before falling ill.)

“He clearly has no respect for the safety of his followers,” Mr. Finnegan said of the president. “He gets them all together where they can get sick while he’s standing up there 40 feet away from everyone. He just doesn’t care.”

Mr. Finnegan said he had been sick with the virus in the spring and had since recovered, as had his son, who has cerebral palsy.

Across the street, a much larger and louder assembly of Mr. Trump’s supporters had gathered near the entrance to jeer Mr. Biden’s arrival. Again, few were masked, and some seemed to walk purposely close to their Biden counterparts as a kind of taunt.

Mr. Biden’s supporters mostly shrugged off the display but took pride in the contrast. “Joe Biden is setting an example of how a president should lead during a pandemic,” said Dylan Hellebrand, who along with his father stood outside Osceola Heritage Park in Kissimmee waiting for Mr. Biden to arrive. He said he was not at all intimidated by the Trump contingent: “They are just noise.”

In contrast, he said, Mr. Biden represents a quieter and more responsible consensus of voters — a kind of masked majority. No one, he said, should mistake Mr. Biden’s limited physical presence on the ground for inaction or lack of resolve.

A few minutes later, Mr. Biden’s motorcade would wind down Highway 192, with the candidate appearing to wave through the tinted glass of his Chevy Suburban. He would pass by in a few seconds, disappearing into a side entrance with barely a sign that he was even there.