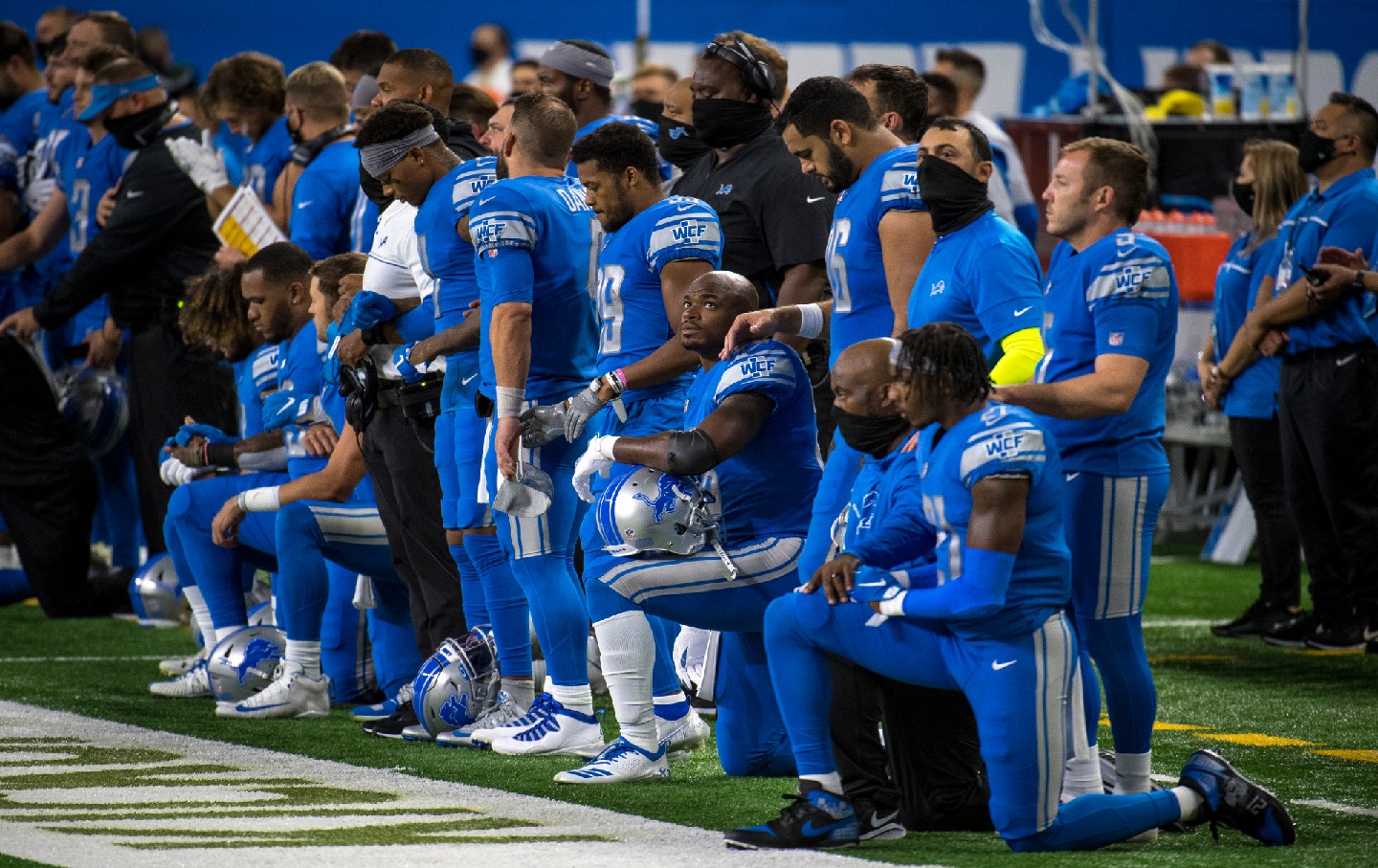 This was a curious opening weekend in the National Football League. After a summer of marches in all 50 states against racism and police violence following the murder of George Floyd, the NFL has been desperate to avoid a players’ strike for racial justice. Since police shot Jacob Blake in Kenosha, the struggle has escalated into labor action in almost every other sports league and the NFL, with billions of dollars at stake, has been trying to avoid any cancellation of games.

To assuage the players, 70 percent of whom are Black, the league put on something perhaps best described as “Branding for Black Lives.” End Racism messages were put up around the stadium and stamped onto the end zones. Antiseptic slogans like “It Takes All of Us” were worn on T-shirts. “Lift Every Voice and Sing,” also known as the Black national anthem, was played alongside “The Star Spangled Banner” before games. The Minnesota Vikings even had the family of George Floyd in their stadium as guests. The air was so thick with messaging that the Miami Dolphins, Houston Texans, New York Jets, and Buffalo Bills chose to stay in their locker rooms during the anthem rather than be a part of the big show. The Dolphins players released their own powerful video about why they wouldn’t emerge for the pageantry, saying, “We need changed hearts. Not just empty gestures.”

The NFL had the temerity to release a video in celebration of its players fighting for Black lives that included an image of Colin Kaepernick and Eric Reid kneeling. Yes, the owners are exploiting the very players they have exiled from their league. Colin Kaepernick called out the “propaganda” of it all on Twitter, and expressed solidarity with his former teammate, friend and fellow fighter for racial justice Eric Reid, who rather suspiciously is an unsigned free agent after a tremendous year with the Carolina Panthers. Kaepernick wrote, “While the NFL runs propaganda about how they care about Black Life, they are still actively blackballing Eric Reid (@E_Reid35) for fighting for the Black community. Eric set 2 franchise records last year, and is one of the best defensive players in the league.”

Despite it all, players expressed themselves on their own terms. Several took a knee during the anthem, including Indianapolis Colts head coach Frank Reich and Baltimore Ravens assistant Wink Martindale. (The sight of a white coach taking a knee is like seeing a unicorn at the Kentucky Derby.) The Seattle Seahawks and Atlanta Falcons attempted to crack the official messaging by collectively taking a knee after kickoff and letting the ball fall harmlessly into the end zone. It was meant to symbolize that there are things more important than football. Other players made sure that the names of people killed by racist police violence—names like Breonna Taylor and Elijah McClain—were visible on their uniforms. One of the most awkward parts of the day was hearing network announcers discuss the players paying tribute to the fallen without using the words “police.” It was as if they had died of natural causes and the players were just giving them a shout-out.

Amid this push and pull between player dissent and league branding, a hero did emerge—but not in the NFL. Naomi Osaka won the US Open in thrilling fashion, and the 22-year-old tennis star wore a different mask before every match with a different name of someone who had been killed by police. After her final triumph, a comeback victory against Victoria Azarenka, ESPN’s Tom Rinaldi asked Osaka, “You had seven masks with seven names, what was the message you wanted to send?”

She gave a response for the ages, looking at Rinaldi and saying, “Well… what was the message you got?”

Naomi Osaka’s message could not have been clearer. The NFL’s, less so. As the fight against police brutality continues, players are going to need to reckon with how much they want to defy the NFL’s branding for Black lives and fight for clarity that this is a struggle, unequivocally, against police violence.

Or as Colin Kaepernick said with such clarity four years ago, “I am not going to stand up to show pride in a flag for a country that oppresses black people and people of color. To me, this is bigger than football and it would be selfish on my part to look the other way. There are bodies in the street and people getting paid leave and getting away with murder…. This is not something that I am going to run by anybody. I am not looking for approval. I have to stand up for people that are oppressed…. If they take football away, my endorsements from me, I know that I stood up for what is right.”