Kobe Bryant’s widow defends the Lakers forward after Alex Villanueva calls on the athlete to match the reward for information regarding the shooting of two deputies in Compton, California.

AceShowbiz –
Vanessa Bryant has taken a jab at Los Angeles County Sheriff Alex Villanueva after the latter challenged LeBron James to step up in an effort to help locate a gunman in deputy ambush. Taking to her Instagram Stories, the widow of Kobe Bryant defended LeBron and called out the sheriff for failing to maintain the department’s integrity in the first place.

On Tuesday, September 15, Vanessa, who is suing the sheriff’s department for the leak of photos from the helicopter crash site, posted screenshots of Twitter posts from a user named @ElanMaree. One of the tweets read, “How can he talk about trusting the system? His sheriff’s dept. couldn’t be trusted to secure Kobe Bryant’s helicopter crash scene, his deputies took and shared graphic photos of crash victims. Vanessa Bryant is suing them.”

Another tweet from the same user said, “He shouldn’t be challenging LeBron James to match a reward or ‘to step up to the plate.’ He couldn’t even ‘step up to the plate’ and hold his deputies accountable for photographing dead children.”

Vanessa also posted photos of eight victims in the January helicopter crash, including her husband Kobe and daughter Gianna. She tagged @lacosheriff in the post. She also noted that “not all deputies are bad apples” and expressed her concern for the wounded deputies as writing, “Prayers for the two deputies that were shot.” 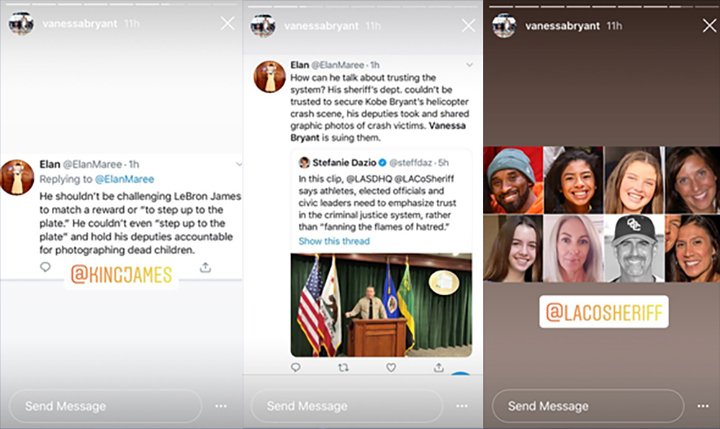 Vanessa’s posts came in defense of LeBron after the L.A. County Sheriff called on the NBA star to match the reward for information regarding the shooting of two deputies in Compton, California this weekend. Currently, there are two private pledges totaling $75,000, in addition to the $100,000 from the county.

During an interview on a local radio on Monday, Alex said, “I want to make a challenge…to LeBron James. I want you to match that and double that reward because I know you care about law enforcement.” Referencing the Lakers star’s stance in Black Lives Matter, the sheriff continued, “You expressed a very interesting statement on race relations and officer-involved shootings and the impact that it has on the African-American community and I appreciate that.”

“But likewise, we need to appreciate that respect for life goes across professions, races, creeds, and I’d like to see LeBron James step up to the plate and double that,” he added.

LeBron himself has not responded to the sheriff’s challenge.