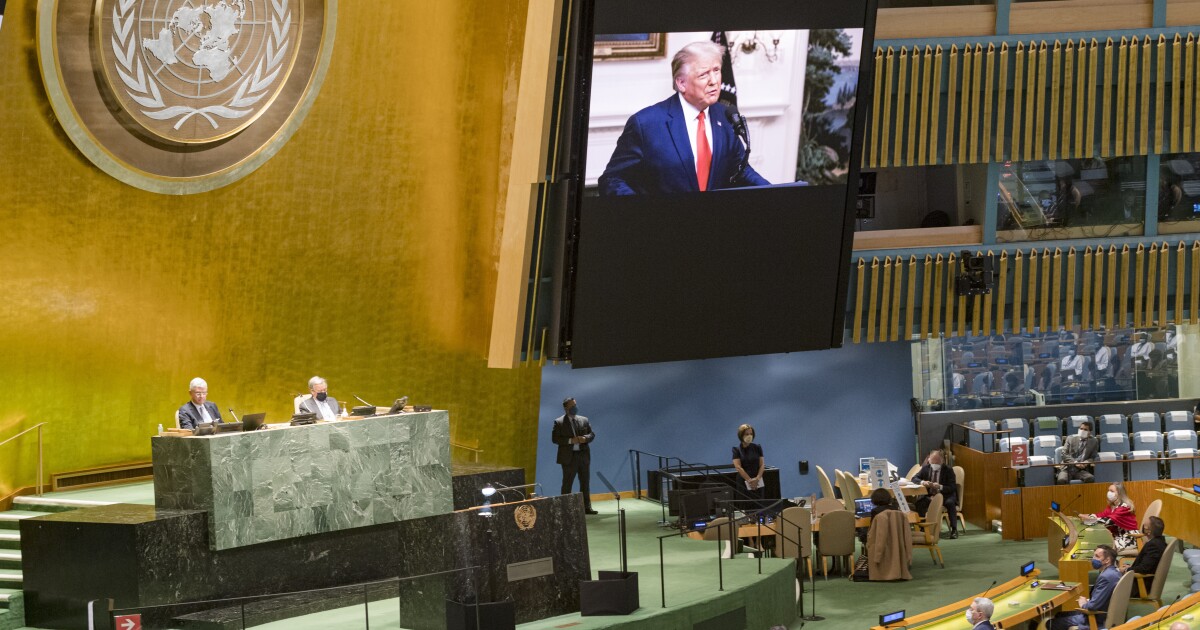 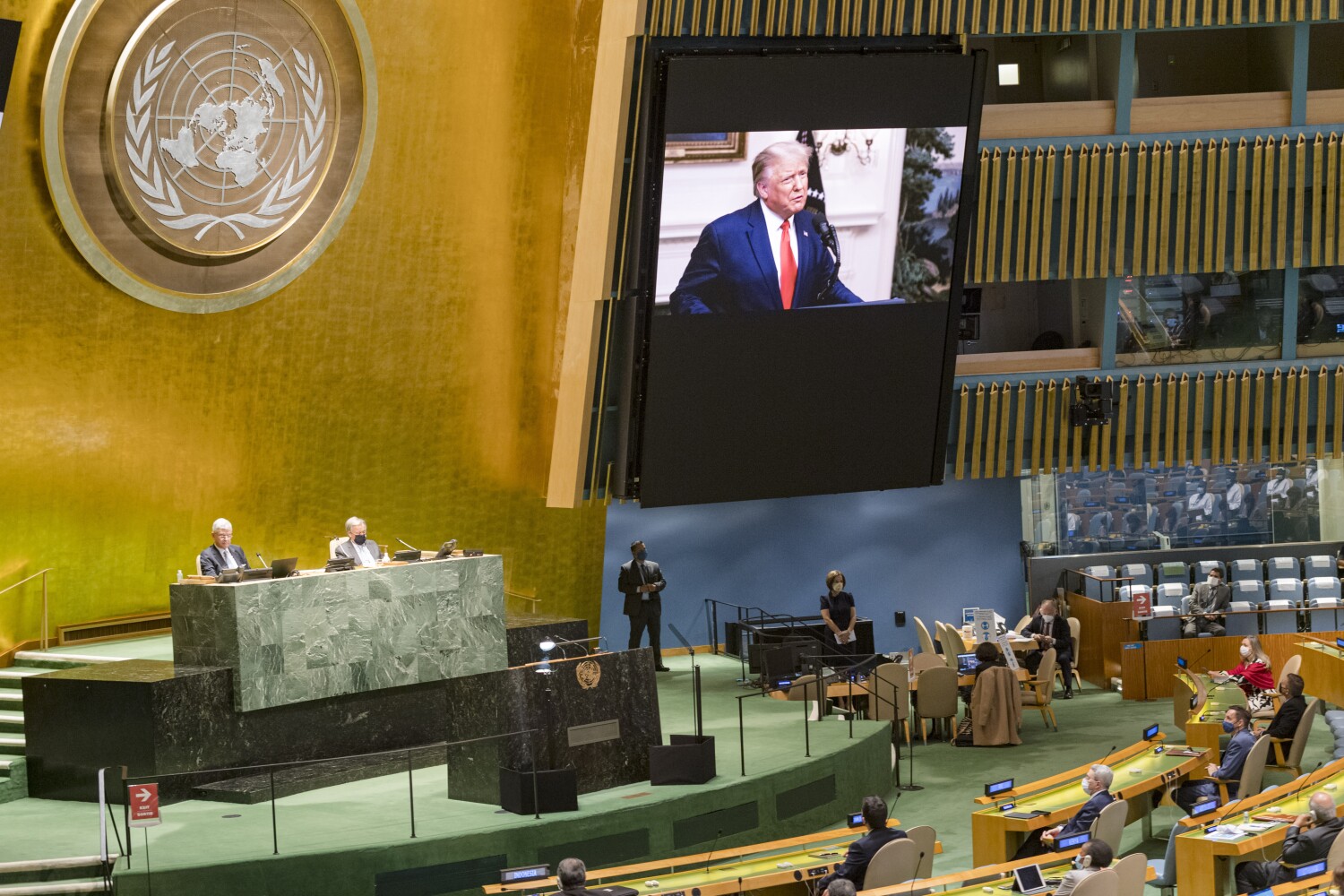 As the United Nations marked its 75th anniversary with a pandemic-era summit conducted virtually, President Trump used the occasion Tuesday to excoriate China, accusing it of “unleashing” the coronavirus on the world even as U.S. deaths from the disease passed 200,000.

Trump, who’d advertised for days on the campaign trail that he would be tough on China, took on the fellow member of the Security Council at the U.N.’s annual General Assembly, with the world’s leaders looking on via video screens. While Trump railed against Beijing, Chinese President Xi Jinping urged cooperation.

Using a term widely seen as xenophobic, Trump said Beijing must be held accountable for the “China virus.” The world’s death toll is on track to reach 1 million. While one-fifth of the deaths and confirmed cases of infections are in the United States, Trump made wildly exaggerated claims about how well his administration has tackled COVID-19, the disease caused by the virus.

“In the United States, we launched the most aggressive mobilization since the Second World War,” Trump said in relatively brief remarks recorded at the White House and delivered remotely. He claimed, contradicting his government’s top scientists and medical experts, that a vaccine will soon be distributed and the virus “defeated.”

“As we pursue this bright future, we must hold accountable the nation which unleashed this plague onto the world: China,” Trump said. He accused China of colluding with U.N. health officials to dupe the world over the severity of the disease, while also attacking Beijing on issues including ethnic cleansing and climate change.

After years of apparent friendship between Trump and Xi, relations between the world’s two largest economies are the most hostile in years, with tension over the coronavirus exacerbating conflicts over artificial intelligence, military activities in the South China Sea and trade.

The unusually harsh speech in a forum that typically sticks to diplomatic niceties had two audiences. Trump not only was speaking to the global community, but also to American voters: Anti-China rhetoric has been central to his campaign efforts to deflect blame for his failings in handling the pandemic, as well as criticism about his responses to trade deficits, climate change and China’s abysmal human rights record.

The tone of Trump’s comments harked back to his first General Assembly speech in 2017, when he taunted Kim Jong Un, the leader of nuclear-armed North Korea, as “Rocket Man” and threatened “to totally destroy” his country.

“The Chinese government and the World Health Organization — which is virtually controlled by China — falsely declared that there was no evidence of human-to-human transmission,” Trump said. “Later, they falsely said people without symptoms would not spread the disease,” he added. “The United Nations must hold China accountable for their actions.”

The president’s assertions of China dissembling about the virus came as he has been on the defensive domestically for minimizing, even falsifying, information about the deadliness of the coronavirus — based on months of recorded interviews with journalist and book author Bob Woodward that contradict his sunny assessments to the public over time.

Trump has already vowed to leave the WHO, the U.N.’s main health body, which has been a top recipient of U.S. aid to combat polio and malaria across the globe. In a tweet, the WHO responded that no government controls its activities, policies or decisions.

Though he has routinely denied that global warming is a problem and withdrew the U.S. from the worldwide Paris climate accord, Trump blasted China for its environmental record. (The United States is the only country in the world to have withdrawn from the Paris pact.)

“Those who attack America’s exceptional environmental record while ignoring China’s rampant pollution are not interested in the environment. They only want to punish America. And I will not stand for it,” Trump said. He added that the U.N. must focus on the “real problems” of the world, such as terrorism, drug trafficking and the “ethnic cleansing of religious minorities.”

By the last item, he was referring to China’s repression of Muslim Uighurs. The Trump administration was slow to criticize China for its treatment of the minority, which it has forced into labor camps, stripped of cultural identity and in some cases, according to human rights organizations, tortured and killed. But since Trump decided that stoking anger against China was politically advantageous, he and his top Cabinet members have routinely decried the plight of the Uighurs.

Asked later if Trump’s attack on China might backfire and undermine cooperation on fighting COVID-19, White House Press Secretary Kayleigh McEnany said, “There is no bigger bully than China when it comes to COVID.”

The General Assembly is usually an elaborate, two-week affair that annually brings most of the world’s leaders to U.N. headquarters in Manhattan. But this year, presidents and prime ministers were asked to submit videotaped speeches ahead of time. Those were then broadcast, starting Monday, to a nearly empty conference hall.

U.N. Secretary-General António Guterres opened the session and, while not naming Trump, declared that “populism and nationalism” — Trump’s hallmarks — have failed, especially in the fight against the coronavirus. He warned against a new Cold War between Washington and Beijing.

“We are moving in a very dangerous direction,” Guterres said. “Our world cannot afford a future where the two largest economies split the globe in a great fracture — each with its own trade and financial rules and internet and artificial intelligence capacities.”

Xi’s speech was taped before Trump’s comments aired, and so he was not responding directly to his American counterpart. Still, he got in his digs as well.

Xi took aim at Trump’s “America first” doctrine, which challenges the U.N.’s core mission of multilateralism since its founding after two world wars. “No country has the right to dominate global affairs, control the destiny of others, or keep advantages in development all to itself,” he said. “Even less should one be allowed to do whatever it likes and be the hegemon, bully or boss of the world. Unilateralism is a dead end.”

He said China had no interest in a “cold war or a hot one” with any nation, and urged world powers to avoid “falling into the trap of a clash of civilizations.”

China’s U.N. ambassador, Zhang Jun, was in New York and, speaking to reporters, condemned Trump’s tone as “incompatible with the general atmosphere” of the world body.

“When the international community is really fighting hard against the COVID-19,” he said, “the United States is spreading a political virus here in the General Assembly.”