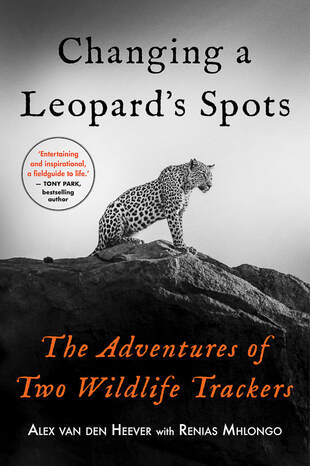 ​By Roxanne Reid
If you’re a regular reader of this blog, you’ll know that I’m a fan of wildlife experiences and a great admirer of wildlife trackers and guides who have an encyclopaedic knowledge of the bush. I’m also a book lover. So when all that comes together it’s deeply satisfying. Like in this book about the adventures of two wildlife trackers.

​If you’ve ever spent time in a safari vehicle with a guide behind the wheel and a tracker in the seat on the bonnet – or on foot with them in the bush – you’ll know how much a good wildlife tracker can enhance your experience. And you’ll enjoy the book Changing a Leopard’s Spots: The Adventures of Two Wildlife Trackers by Alex van den Heever with Renias Mhlongo (Pan Macmillan 2020). I devoured it in just two days, which as wildlife books go is pretty fast, almost like reading an action story.

These two trackers have spent more than 20 years together. The book takes you back to their early days of tracking leopards and lions at Londolozi in the Sabi Sands, Greater Kruger Park, and shows how Renias mentored then-newbie Alex as he developed his skills. Follow along on their journey and read about their successes and failures, get insight into how good trackers work and the importance of building good relationships.

I loved the stories and anecdotes scattered throughout the book. For instance, how Renias’s knowledge of bird calls, especially alarm calls, helps him anticipate mammal behaviour – like the time he followed a flock of white-crested helmet-shrikes to find a leopard’s den where she had stashed her cubs. How his knowledge of the behaviour of animals like impalas might alert him to the presence of predators like wild dogs or leopard. Not to mention him learning as a young boy to mimic birds so he could do things like call up greater honeyguides to lead him to a bee hive.

Think tracking is just about spoor? Think again. Learn how in the hands of a true master it can have a creative approach. They use what they’ve observed and then make deductions based on their knowledge of animal behaviour. For instance, if leopard tracks are heading towards a cool shady riverbed at midday, it’s reasonable to deduce the animal might be resting in the donga after a meal. ‘This approach only works for those trackers who possess both exceptional technical competence as well as refined understanding of animal behaviour and local knowledge,’ writes Alex.

Read how Alex and Renias’s closeness while working together all day created an ‘intuitive and effortless working style where [they] were in complete sync with each other’. Learn how Alex discovered the importance of clearing your mind of external worries (or even worries about whether you’re failing at tracking a particular animal), and the importance of concentrating only on the task at hand, keeping calm, hyper-aware and focused.

I also enjoyed their adventures outside the Greater Kruger area that they know so well. Getting leopards used to vehicles in Rwanda, even venturing outside Africa to get jaguars in Brazil’s Pantanal used to vehicles so that visitors could see them, to track grizzlies in North America and mountain lions in South America. It becomes evident that solid knowledge of track awareness, track anticipation and predicting animal behaviour can take you far out of your usual environment and still be useful – as shown when Renias and Alex successfully followed mountain lion tracks over frozen ground in Patagonia.

Forming the Tracker Academy
You’ll read about Alex and Renias’s formation of the Tracker Academy in 2010 with the financial support of Gaynor Rupert. I had come across the Tracker Academy when I visited Samara Game Reserve near Graaff-Reinet in the Karoo. Here, master tracker Pokkie Benade teaches hand-selected youngsters the techniques of tracking so that they can go on to work in conservation, ecotourism, wildlife monitoring, anti-poaching and so forth. So it was interesting to read more about its background, and how a partner site was set up at the same time at Londolozi, where Renias has been the instructor passing on his skills to the next generation. More recently a third site has been established at Tswalu in the Kalahari. 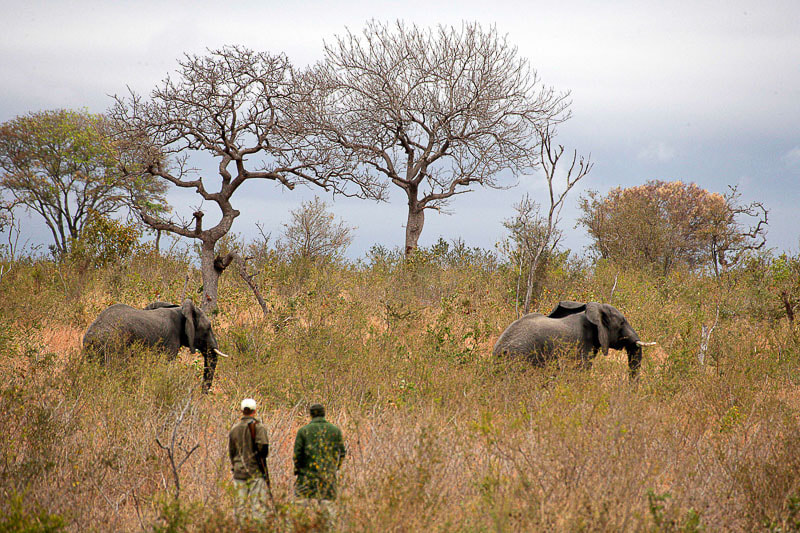 Alex and Renias in action in the bush

The book touches on both the need for such an academy and the duo’s desire to do something positive for both wildlife and people. As Alex points out, unless local people near game reserves can benefit from wildlife in some way, there’s little incentive for them to protect it. The Tracker Academy gives them a way both to contribute to and gain (through employment) from ecotourism and photographic safaris. The idea is that by giving a full-time year of hands-on practical tracking experience, you create a new generation of qualified trackers who are not mere ‘hood ornaments’ – a derogatory term given to trackers who simply sit on the bonnet and point out the obvious. Best of all, the academy helps graduates to find employment. Some 90% of them have found permanent jobs, which means that conservation, ecotourism, wildlife monitoring and anti-poaching are benefiting from the skills they have learned.

Building relationships in South Africa
Apart from the thrill of the wildlife commentary and the scenes of Alex and Renias in action tracking animals, the book also throws light on building relationships between people of very different backgrounds and culture. Through discussing their own relationship, it touches on the importance of an open heart and mind, a willingness to try to understand another person’s life experience, to ‘gain a genuine and honest understanding of [another’s] culture and the behaviour associated with being respectful and respected.’

Read how Alex learnt from Renias’s family the importance of compassion, respect and kindness to hold a community together. In a chapter called ‘Tracking racial prejudice’, he makes an impassioned plea for South Africans to rid themselves of intolerance and bigotry and instead find harmony with people of different ethnicity and culture. After all, he notes: ‘Diversity is fundamental to a flourishing natural system and, as partners in South Africa Inc., we should all see diversity as a gift and leverage it to our collective benefit.’

If you love wildlife, conservation and stories of the African bushveld, you’ll enjoy this book. It may also suggest to you ways in which you can try to gain a wider and deeper view of both wildlife and people from different backgrounds.

You may also enjoy
Eastern Cape safari at Samara Game Reserve in the Karoo
Why to walk a 3-day wilderness trail at Kruger Park
101 Kruger Tales: book review

Copyright © Roxanne Reid – No words or photographs on this site may be used without permission from roxannereid.co.za