Proposing the idea via a social media post, the ‘Betty’ singer’s devotee suggests Blake Lively, Ryan Reynolds and Jesse Tyler Ferguson as the stars of the possible project.

AceShowbiz –
A Taylor Swift fan has envisioned a movie based on the star’s track “The Last Great American Dynasty” – and the hitmaker’s totally onboard.

The user took to social media on their @TSlifestyle13 Twitter account to propose the idea, suggesting Taylor’s friends Blake Lively, Ryan Reynolds, and Jesse Tyler Ferguson should star in the film.

“‘The Last Great American Dynasty’ would make an incredible movie. The story is timeless yet unique, the music would be exquisite, and it already has the perfect title. As for the cast: Blake Lively (Rebekah), Ryan Reynolds (Bill), Jesse Tyler Ferguson (neighbor),” the fan tweeted.

Jesse was the first one to see the tweet and he retweeted it with the message, “Ok I’m avail for this.” Ryan later joined the conversation, responding, “But Bill’s heart… ?”.

And they’re not the only ones up for getting involved in the possible project – the hitmaker herself also chimed in, writing, “not trying to be The Loudest Woman This Town Has Ever Seen but… I LOVE THIS.” 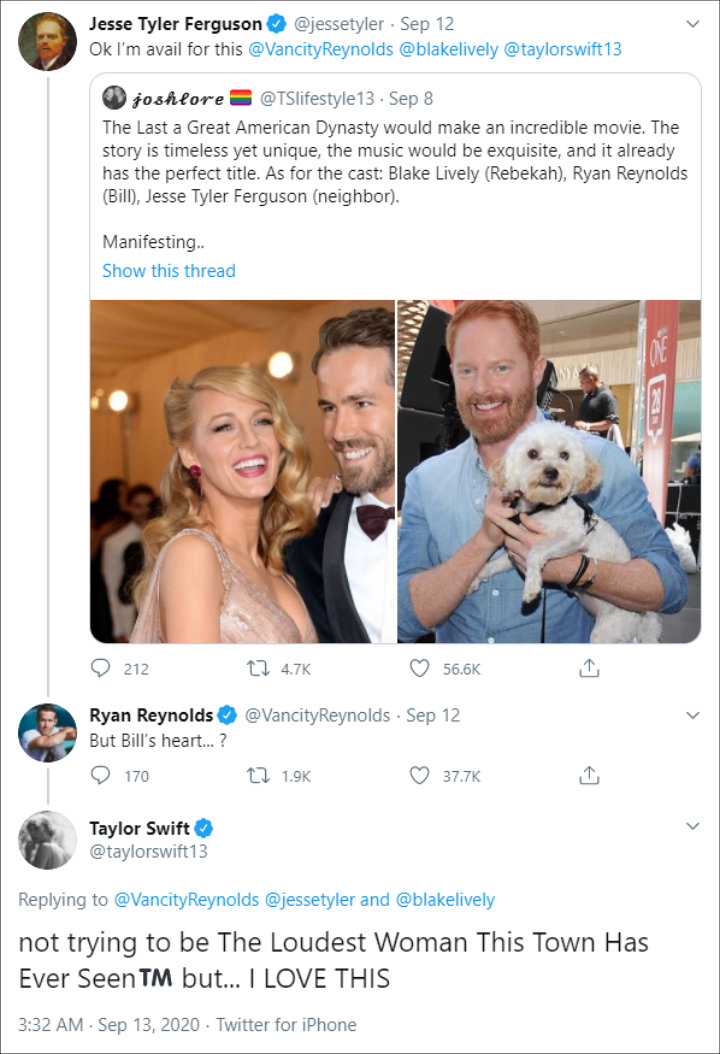 “The Last Great American Dynasty” is on Taylor’s latest album “Folklore”, and is based on eccentric heiress and ballet director Rebekah Harkness who once owned the singer’s multi-million-dollar beachfront mansion in Watch Hill, Rhode Island.