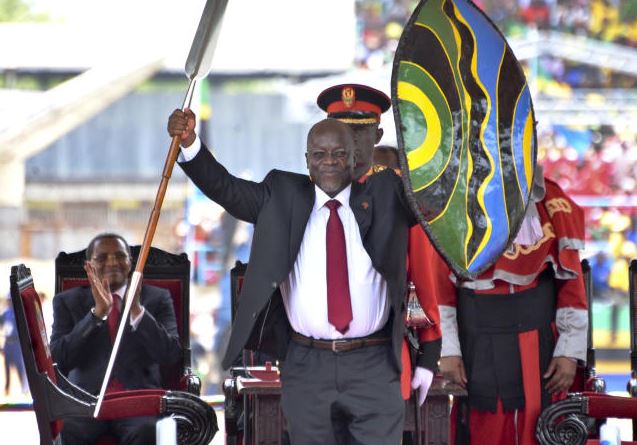 Magufuli (pictured) is taking oath to serve Tanzania for another five years, and his second term, which will run from 2021-2025.

Magufuli held up a ceremonial spear and shield to signify the beginning of his presidency, shortly after taking oath on Thursday morning.

He will be deputised by Samia Suluhu Hassan.

Kenya is being represented by Cabinet Secretary in the Ministry of East African Community and Regional development Adan Mohammed, and Interior CAS Hussein Dado.

Subscribe to our newsletter and stay updated on the latest developments and special offers!

At the weekend, President Uhuru Kenyatta sent a congratulatory message to Magufuli following his re-election.

Uhuru said Magufuli’s re-election demonstrates the deep love, confidence and trust the people of Tanzania have in his leadership.

Magufuli garnered 12.5 million votes-84 per cent of the votes cast against 13 per cent for Opposition Leader Tundu Lissu, who got 1.9 million votes.

Lissu, who was arrested on Monday this week termed last week’s polls as illegitimate.

“In line with the electoral laws, whatever happened yesterday was not an election. It was a gang of people who decided to misuse the state machinery and cling back to power,” he said in a televised address on Thursday.

During his arrest, Lissu claimed that Tanzanian authorities thwarted planned opposition protests against the election over alleged irregularities by arresting several Chadema officials.