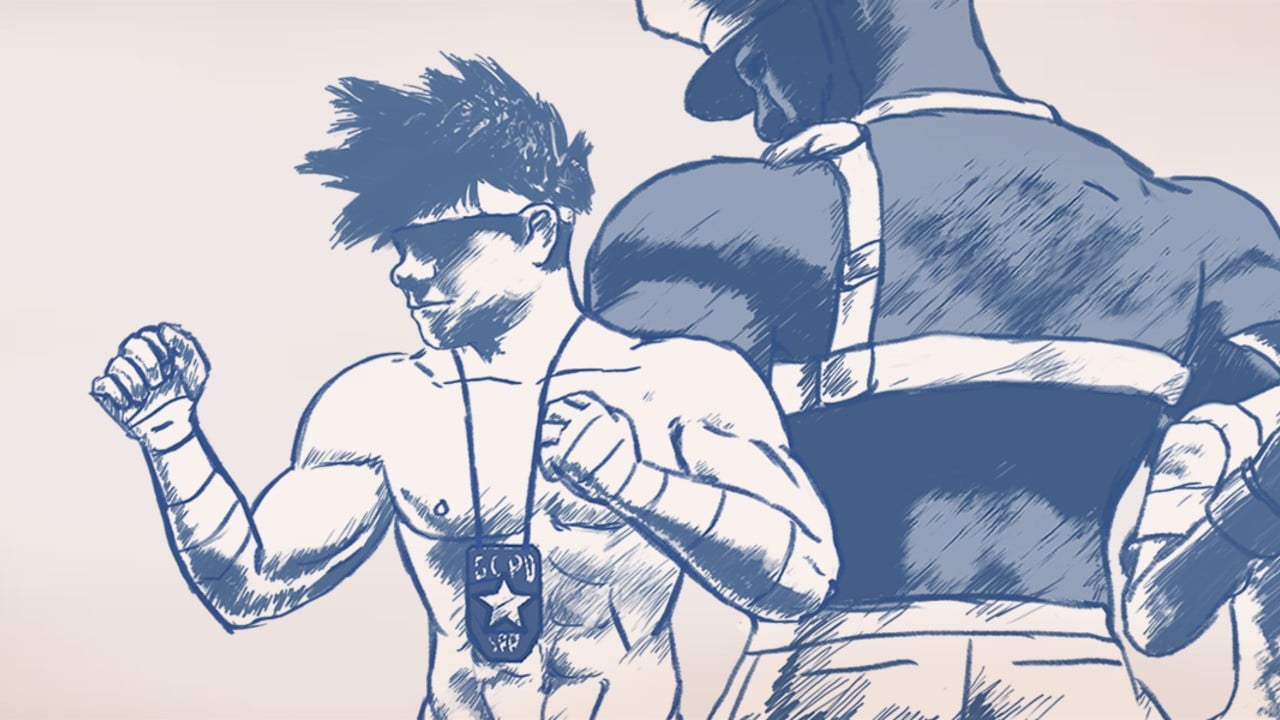 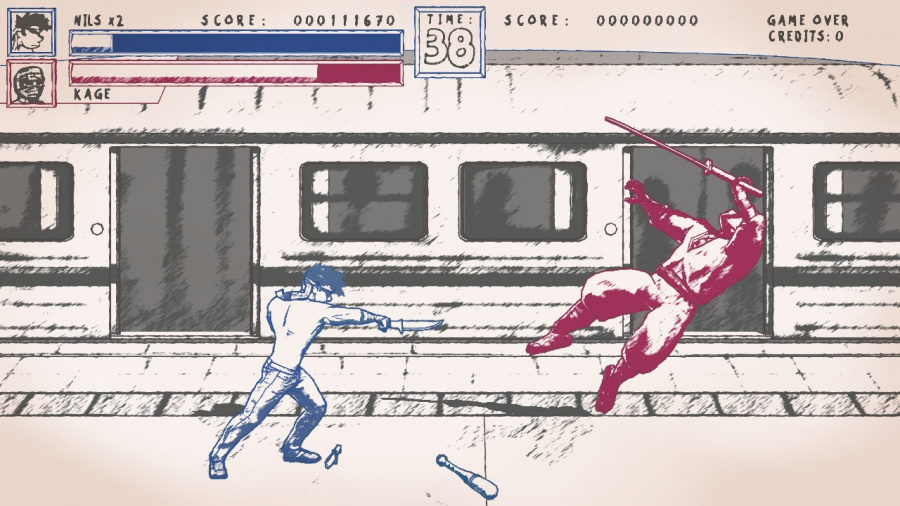 Super Punch Patrol sees a return to the signature sketchy style of Gunman Clive from developer Bertil Hörberg, last seen on Switch with really rather brilliant boss-’em-up Mechstermination Force. Here, though, he’s turned his hand to the brawler genre with what feels like a homage to Capcom’s Final Fight. Well, more specifically, down to heavyweight character Chief Anders, who is Haggar all the way down to the piledriver and thinly-concealed homoeroticism.

Not that the piledriver will help you much; Super Punch Patrol is hard. Even on the default (“Normal”) difficulty, we found ourselves running out of continues by stage three on our first few attempts. Unlike a lot of the staples of the genre, using a continue dumps you back at the start of the level rather than allowing you to pick up directly where you left off – a decision we feel is a little odd. If the concern is with players getting through the game too easily, reducing the number of credits but letting you persevere from where you died seems to us like a better solution. This is how the game works in co-op (only local play is available), and perhaps it should have applied to single-player as well. 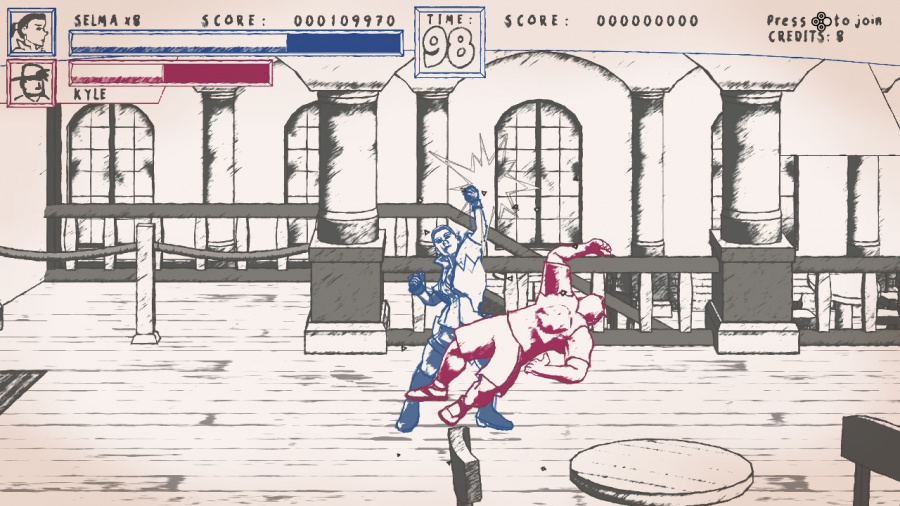 Of course, the option is there to reduce the difficulty, but ultimately the only way you’ll persevere is by practising and playing carefully – it’s a game that doesn’t give you a break, with multiple enemy types coordinating each battle remarkably quickly. You’ll need to pay close attention to and identify your assailants in order to take them apart in the most efficient way. Get surrounded and you’re most likely dead, regardless of difficulty level chosen.

You have a desperation move activated with the X button, but it drains your health even if it doesn’t connect. Also, particularly in Anders’ case, there’s a short delay before the attack is unleashed and you can still be hit repeatedly while it’s “charging”; we found it was often not worth the health trade-off and better to be knocked down. It’s tough to the point of frustration, but we never found it unfair – once you get to grips with your character and which enemy type is more vulnerable to which move, there’s a pleasingly tactical feel to the whole enterprise that lends it more credibility than the more unfair 10p-munching belt-scrollers of arcade yore. 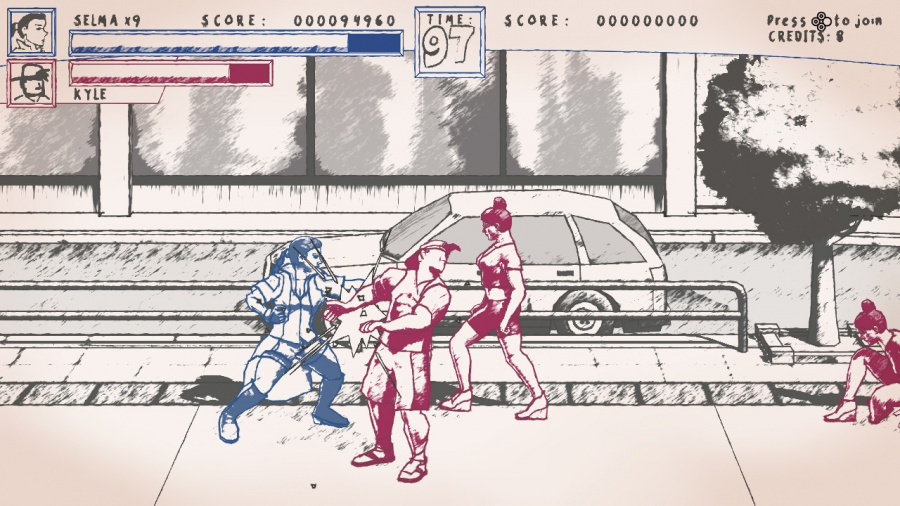 So, no matter how you approach Super Punch Patrol, it’s going to be rough going. Much more unforgiving than the already-quite-hard Streets of Rage 4, but – crucially – it’s less than a quarter of the price, too. Considering that it costs less than a typical lunch, Super Punch Patrol packs a lot of… erm… punch (sorry) in terms of value. The three initial playable characters aren’t hugely different, but you’ll miss at least one of the other’s attributes whichever you pick. Other than your standard punch and kick combos, jump attacks and the aforementioned desperation move, you’ve got a dashing attack activated by a double-tap of the D-pad which is often remarkably useful. You’re also able to double-tap up or down to quickly hop between “lanes”, which can get you out of dodge remarkably quickly. Beat-’em-up staples such as breakable barrels full of cake (making a welcome return from Gunman Clive) and weapons you can grab and use are present and correct.

In fact, there are elements and ideas here borrowed wholesale from the likes of Streets of Rage; there’s a jetpack-wielding boss battle that raised our eyebrows with just how similar it was to the Sega equivalent, and the final battle is a bit of a shameless lift; though we must add, without spoiling it, there’s a twist to said battle that made us laugh out loud.

The sketchy graphical style is befitting of a game that feels like a love letter to myriad titles in the rather prominent scrolling brawler genre. It’s never unclear what you’re looking at thanks to the stark colour scheme that’s akin to BIC biro scrawlings, but in an evocative and interesting way rather than slapdash or lazy. Everything runs at a smooth 60 frames per second consistently, even when the screen is absolutely rammed with enemies. The visuals never get in the way of the action, basically, and any mistakes are on you. Which is, of course, exactly how it should be. This satisfying and challenging action is scored by an excellent soundtrack from Arne Hörberg that calls to mind Capcom’s arcade brawlers and keeps the blood pumping.

Super Punch Patrol feels like a greatest hits package, but that’s the thing about the greatest hits – they’re great. And so is Super Punch Patrol, in the end. For the price you’ll pay, it’s nothing short of spectacularly generous; there are only five stages, but they’re tough as old boots and it’ll take time to master the challenge and see those credits roll. With costumes and characters to unlock there’s reason to keep playing even after you surmount this beastly little brawler, and at £4.99 it’s a bit of a no-brainer.