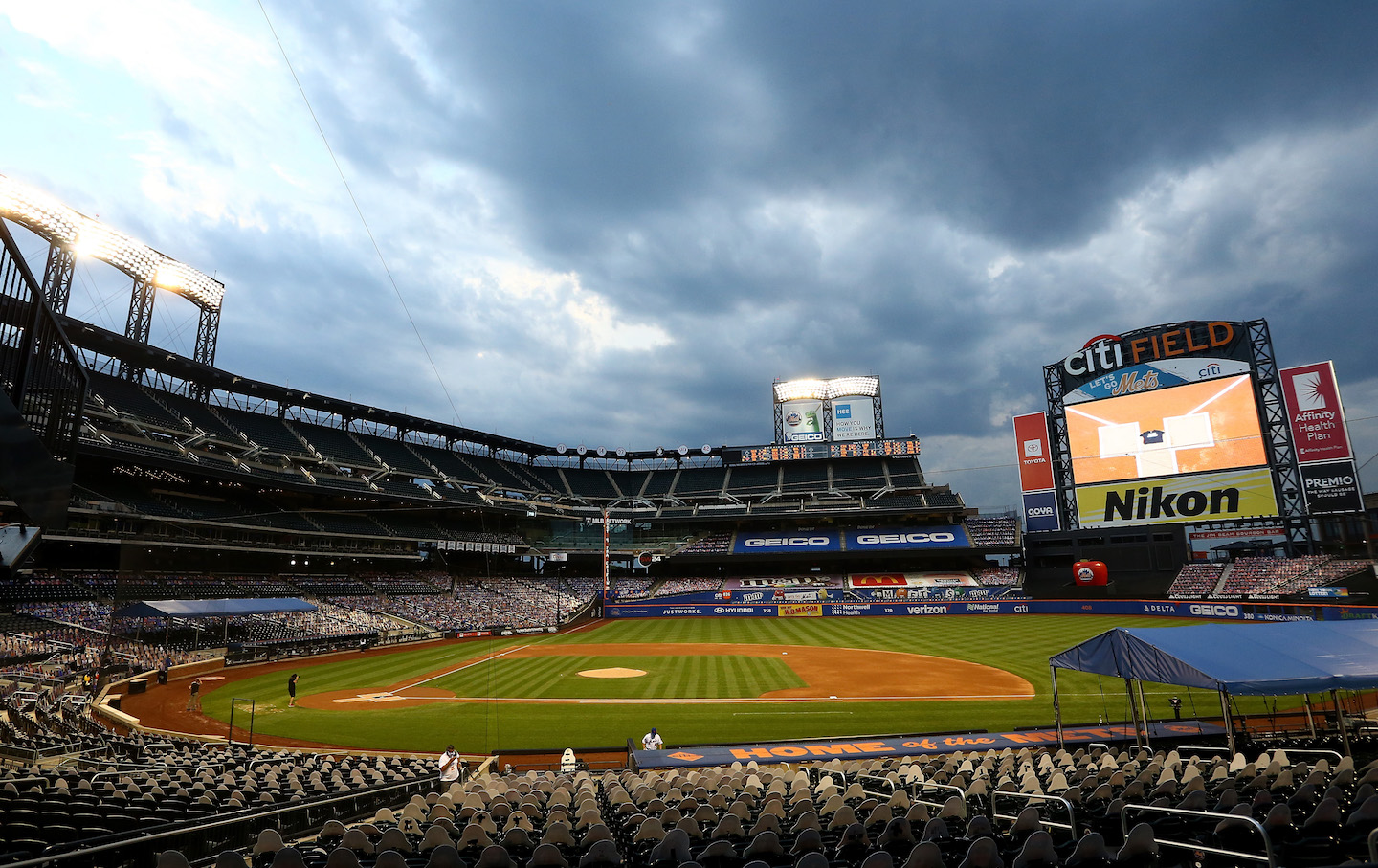 Citi Field after the New York Mets and the Miami Marlins walk off the field prior to the start of the game on August 27, 2020.

The wave of strikes by athletes against racist police violence is not ebbing. On Thursday night, the New York Mets and Miami Marlins took the field, held a 42-second moment of silence (in honor of Jackie Robinson), and then walked off. They left behind a shirt that read “Black Lives Matter” on home plate.

Numerous NFL teams have canceled their practices, with the Baltimore Ravens, after a four-hour team meeting, putting out a remarkable action statement. NBA referees even organized a march in the Orlando Bubble, wearing T-shirts that read, “Everyone Against Racism.” Even the National Hockey League, after first ignoring what was happening, to the chagrin of many players, canceled a slate of games in solidarity with the events swirling around the sports world.

Pro athletes have shown themselves willing to fight and be heard. Black athletes are saying that they no longer will be a repository of adulation with their uniforms on but a risk to be killed by police when the uniform comes off. It is a historic moment by any measure, and one without a blueprint. We don’t know where this is going, or how long it will last. But folks are already asking what this can actually accomplish beyond raising awareness about the shooting of Jacob Blake.

For now, it’s centering the conversation in this country on racist police violence and not the gaslighting “law and order” bombast coming out of the RNC, and inspiring people to violence during a time of relentless darkness. Frankly, if nothing else came out of it, it would still be important. But the players want more. Supporters want more. Everyone strangled by the absence of political oxygen in this broken country want more.

NBA player leaders want the franchise owners to put some “skin in the game.” They want the billionaire owners—who are not only wealthy but politically connected to every municipality where they have a publicly funded stadium—to push for legislation and using their influence to fight back. As NBA insider Shams Charania from The Athletic reported on Twitter from a meeting between players and owners, “Players challenged owners to be proactive, not reactive, to social justice changes; create actions, not simply financial commitments.”

I’m all for extracting concessions from billionaires. But there is another avenue the movement can take. What these players are doing is nothing less than striking for Black lives. They are using their power as workers to protest not only the police shooting of Blake and the white supremacist terrorism in Kenosha, but also the fact that, as one player put it, “nothing is changing.” After a summer of marches, uprisings, and occupations, scant legislation has moved and police still act with impunity.

By exercising their power as workers, the players are inspiring an incredibly dormant part of the resistance to racism and Trumpism: the labor movement. If the NBA can shut down in protest of racist police violence, why not other industries? Why not cities? Why not entire sectors of the country’s economy? Strikes do not have to be about wages and benefits. There is a long, hidden history in this country of striking for human rights—“not just bread but roses.” It’s a history the players could help revive.

That may sound far-fetched, but I can say that I received half a dozen calls from unionists or union officials last night telling me that they and their members felt like they had been hit with an electric prod. The idea that everyone in the country was talking about this “strike” taking place was making so many of these workers feel like they also had power.

This isn’t just about solidarity. This is about results. If the players want the results they crave, and if the country is as broken as they believe it to be, this is an actual solution: to strike against racist police violence. to strike against Trumpism, to strike for Black lives. Nothing else has worked. But by withdrawing their labor, the players in the NBA have immediately brought their bosses to the table and launched a national conversation. If that message blares across the land—and if labor leaders rise to the occasion and respond with equal courage—we could finally see solutions and not feel like we are all poised with bated breath, just waiting for the next hashtag.