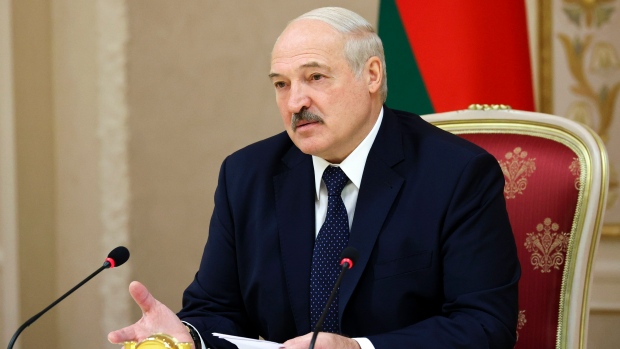 
KYIV, UKRAINE —
President Alexander Lukashenko of Belarus has assumed his sixth term of office in an inauguration ceremony that wasn’t announced in advance.

It comes after six weeks of mass protests against the official results of the Aug. 9 presidential election that resulted in Lukashenko’s reelection after 26 years in office in office. The opposition in Belarus has challenged the election as rigged.

According to the official results, Lukashenko, who has run the ex-Soviet nation of 9.5 million with an iron fist, won 80 per cent of the vote. The United States and the European Union have also criticized the violent police crackdown on post-election protests in Belarus.

During the inauguration ceremony, Lukashenko swore to “serve the people of the Republic of Belarus, respect and protect rights and freedoms of people and citizens.”

After being sworn in, he was handed the ID card of the president of Belarus by the head of the country’s central election commission.

Lukashenko’s strongest election opponent, Sviatlana Tsikhanouskaya, got 10 per cent of the vote according to the official results. She didn’t accept the outcome of the election as valid. Neither did many European governments and thousands of Tsikhanouskaya’s supporters.

Protests demanding Lukashenko to resign have rocked the country daily since last month’s election, with the largest rallies in Minsk attracting up to 200,000 people.

During the first three days of the protests, demonstrators faced a brutal crackdown, with police using truncheons and rubber bullets to disperse crowds. Several protesters died.

Lukashenko has bristled at suggestions of dialogue with the opposition. Amid international outrage, Belarusian authorities switched to prosecuting top activists and mass detentions, avoiding large-scale violence.

Many members of the Coordination Council that was formed by the opposition to push for a transition of power have been arrested or forced to leave the country.