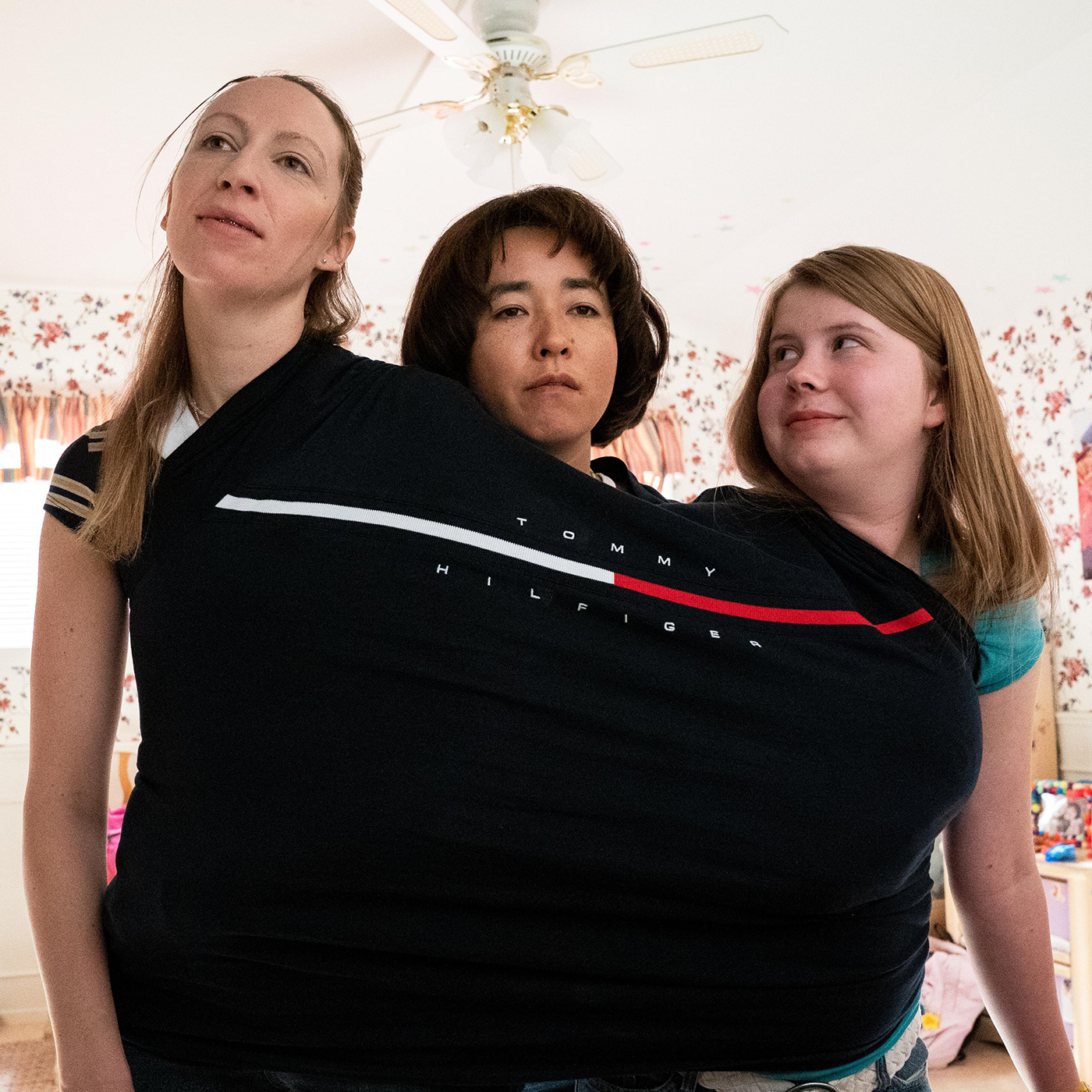 
Now that everyone’s had the past weekend to binge-watch season two of Pen15, let’s talk about it. (And if you haven’t watched any of it yet, beware of a few minor details about the new season ahead—skip to the next paragraph if you choose!) Maya and Anna—played by show creators Maya Erskine and Anna Konkle—are still in the 7th grade, but the vibe this time is noticeably heavier and more angsty. For instance, the girls are now calling their moms the c-word to their faces, they’re exploring Wicca, they’re being gaslit by a boy, and they’re forced into a terrifying bout of Bloody Mary (by getting locked inside a pitch-black bathroom, naturally). Season two is a stark reminder that being a teenager can suck a lot less if you have a best friend to help you get through it.

One could say that the Y2K fashion decorating Maya and Anna’s teenage years was also terrible, but the way it’s pulled off so accurately on the show is incredible. It’s safe to say that the early teen years were probably a complex time for many of us—I distinctly remember wearing a baby doll tee with baggy overalls in middle school and simultaneously feeling sartorially liberated and excruciatingly self-conscious, all for showing the slightest slivers of my side midriff. I felt uncomfortable in my body and the clothes I wore were just a visible extension of how awkward I felt within. The costumes of Pen15 have a way of taking me back to that vulnerable state of mind, but as an adult viewer, I’m left feeling grateful for having shared that same experience with so many others who also came of age during the turn of the millennium.

All this to say, I’m thrilled to speak with Pen15 costume designer Melissa Walker about the looks of season two and how she once again pulled it off with such attention to detail. The dELiA*s aesthetic is back in full force—think denim tankinis, bungee cord pants, Kangol hats, friendship necklaces. (Bonus: This season, we can all dress like Maya and Anna thanks to a brand-new collection of Pen15-inspired clothing, available at Land That Look.)

Here, Walker talks about bringing the Pen15 collection to life, the joy of seeing Maya and Anna embrace cringe clothes, and the challenges the crew faced when covid-19 interrupted their last week of shooting (which is why season two is only seven episodes long). And perhaps not surprisingly, as with all cyclical fashion, elements of Y2K fashion are also back—as proof, Walker elaborates on how to make these styles wearable in the 2020s. Pen15 season two is available to watch on Hulu now.

On Using Costumes to Go Deeper In Character

“We got to do a lot of character development through the clothing in season one. Season two was a real treat because we got to build on those characters and really round them out and ask, ‘OK, what would be Anna and Maya’s approach to becoming Wiccan or doing the school play?’ We got to build on the aesthetic that we already developed for each character, and it was such a joy to be able to go a little more hog wild.”

On Looking Uncomfortable as a Goal

“I’ve worked on so many comedies where actors are like, ‘Yeah, I want the pants to be tighter.’ Secretly they all want to look cute—but Anna and Maya were all for the discomfort. They were saying things like, ‘I don’t care if the bands are too tight’ or ‘I want to have a muffin top’ or ‘I want to be a little uncomfortable.’ To be given that freedom as a costume designer really helped us find the authenticity. I mean, at that age your body is going through massive changes, and you’re not able to have a sense of self yet. You don’t know what exactly is developing or how. I thought this season gave us such a realm to really play with them finding themselves through their costumes.”

“God knows, I got the first script, where Anna and Maya are at a pool party, and I was a little taken aback—this episode was such a fun challenge to reconstruct bathing suit pieces from the 2000s with built-in compression to make the girls appear like teens. It was fun to just go through old magazines and catalogs and remember some of the tankinis. I remember my friend had the handkerchief bathing suit top.

With Anna’s swimwear, I remember that exact fabric and then I found it in spandex. I remember back when people had zippers and weird accoutrements on their bathing suits. We played with those different details to make it feel authentic but also just gross. For a minute the swimsuit looked too cool, so we thought of a few more gross things we could add. I was like, ‘Well, I had a swimsuit once with fringe on it, and nothing is more disgusting than wet fringe.’ So we tried that, but it was too over the top. I mean, the ladies are amazing. It’s so nice to have that back-and-forth collaboration with the leads.”

“I love Anna and Maya to death, but they’re kind of these seventh-grade dorks, so we made the collection edgier and more marketable. A little more of the ‘popular girl’ style, but also something that can be worn by people in their mid 30s to 40s who are reflecting back on that time. We didn’t want to bring back pants with one-inch zippers and low waistlines, so instead we took some of their favorite looks from the season and tweaked them so they’re more flattering, and added higher waists. For example, we have a ribbed stretch velvet pant that looks like corduroy. They’re comfy and made for quarantine living.

I made paper dolls of Anna and Maya’s favorite looks and pitched it to Hulu. I ended up having a business proposal, and I researched different licensing deals. I started talking to other designers to collaborate with—the program we are developing is to help other costume designers generate sustainable lines based on their on-screen work. We have partnered with Bomme Studios, which is a CFDA-approved resource, and are working to make them union signatory so we can bridge the gap between fashion and costuming.”

On Designing Clothes During a Pandemic

“All the factories that I was working with switched over to strictly making masks, so it forced me to do more hands-on work—I was actually working from my home atelier on draping and patterns. When the factories opened up again, I got to do private appointments with a bunch of deadstock and vintage material companies in Downtown LA. I’ve gone through waves of, ‘Oh shit, is this going to happen in time?’—trying to work on a website and figuring out how to do a socially distant photo shoot. But I’m feeling confident about it now.”

“That [episode with Maura, the new rich friend] was especially fun, coming to realize how different socioeconomic upbringings can start to affect middle schoolers and how they want to present themselves to look cool. Maya’s wearing brands of hand-me-downs from [her older brother] Shuji because she doesn’t have an allowance or a job, and she doesn’t have the freedom to go shopping without her mom yet. If Anna has a slightly cooler pair of jeans, then Maya’s jeans won’t have any embellishments. If anything, [Maya’s mom] Yuki would have been like, ‘That’s the trend? I’ll make that for you.’ She would have taken some rickrack and sewn them on Maya’s jeans herself. You can see Anna and Maya move towards more of a Maura aesthetic in the episode where she’s introduced, but the matching looks are still translated in their own ways. We carefully chose what to use there to make it slightly off.

Anna grew up in Vermont, and she mentioned all the cool girls had Tiffany’s jewelry. I think Maya said that all the cool girls in LA, where she grew up, had these certain sandals that they got from when they vacationed in Hawaii because that’s what the rich, popular girls did. So there were so many different aspects to bring in, especially because we wanted the setting to be anywhere in Middle America.”

On Dressing the Boys of the Show

“With Alex [who is Anna’s crush], I dressed him like the boys I had crushes on in middle school, with surfer trends and button-down shirts. I wanted to have [the unpopular boys] Jafeer, Gabe, and Sam look dorkier than the cool boys. Jafeer is in a bunch of monster truck and wrestling shirts—I had to sneak in Grave Digger, which is from the Outer Banks, where I grew up. It’s my little Easter egg.”

“We have a lot of stuff that we had bought [for the] first season. I went to a lot of costume houses and did more builds this season. But it was insane the way some of the kids shot up in a year. One actor will be the exact same size and height, and another actor will have grown a foot and a half. So we had to recreate a lot of their closets based off of how much 13-year-olds grow in that year-long time span.

The things that I was getting on eBay for season one for $30 were like $300 for season two. It was insane seeing clothes from the mid to late ’90s becoming trendier and trying to find those vintage pieces, specifically the 1999-style Adidas that Alex wears. I was blown away by how expensive those were for season two.

I also got to do collaborations with brands like Tommy Hilfiger and Skechers. For instance, I wanted to have one of the kids in a CKY shirt, and then Viacom reaches out and says, ‘Actually, CKY are huge fans of the show.’ I’m like, shut up, that is so fun for me when people say they want to collab. For season one, everyone was asking, ‘Who are you? You want loans for what?’ And now they say, ‘We’ll give you whatever you want.’ I mean, Lucky Brand—we went through some of their vintage archive graphics, and we got to remake some shirts. It was exciting to collaborate with specific brands from that time and rehash old styles. It’s a fun ride.”