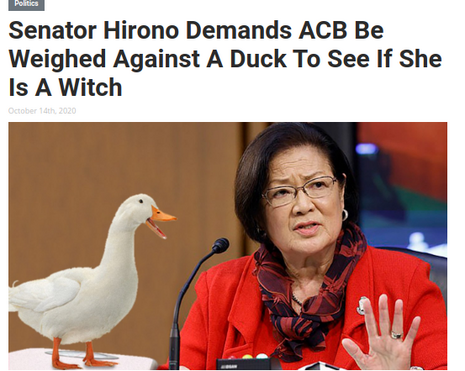 Thou shalt not mock the left, certainly not with an election looming.

In Saturday’s New York Times, tech reporter Kevin Roose talked with Times reporter Emma Goldberg about her previous humor-impaired article regarding The Babylon Bee’s brand of satire, which is controversial among the left and the media because unlike The Onion it mocks political figures and ideas other than Donald Trump and the GOP.

Goldberg actually came off more sympathetic to The Babylon Bee’s satirical strategy than Roose, who always managed to discover, or at least suspect, sinister conspiracies afoot on the right. His treatment strongly hinted that previous social media moves to fact-check the Bee had validity:

On Friday, President Trump tweeted a story from an unusual source: The Babylon Bee, a right-wing satire site that is often described as a conservative version of The Onion.

“Twitter Shuts Down Entire Network to Slow Spread of Negative Biden News,” read the story’s headline. The story was a joke, but it was unclear whether Mr. Trump knew that when he shared the link, with the comment “Wow, this has never been done in history.”

I chatted with Ms. Goldberg about her article, The Babylon Bee’s habit of skirting the line between misinformation and satire, and how it capitalizes on its audience’s confusion.

Some of Roose’s clueless questions are in italics, followed by Goldberg’s almost-as-silly replies (click “expand”):

KR: So this is a blog about distortions and misinformation, and one thing I’ve noticed recently is that a lot of The Babylon Bee’s most successful articles in terms of online engagement are the ones that are … less obviously satirical.

EG: Totally. And that’s landed them in some hot water.

KR: Like, one from the other day was called “NBA Players Wear Special Lace Collars to Honor Ruth Bader Ginsburg.”

EG: People were sharing that thinking it was real.

The very fact that Roose considered the NBA-RBG tribute story believable suggested his own leftist gullibility.

He also huffed about how The Babylon Bee being “a satire site” was some kind of dodge the Bee was using to avoid Facebook’s “fact-checking” program, which of course is tilted toward Biden, accusing the Bee of “misinformation under the guise of comedy.”

Such judgmental handwringing over that rare bird — a right-wing satire site — has become even more newsworthy, now that Facebook has apparently blocked a Babylon Bee story claiming Senator Mazie Hirono (D-HI) had accused Amy Coney Barrett of witchcraft during her Senate hearings.

The supposedly misleading headline: “Senator Hirono Demands ACB Be Weighed Against A Duck To See If She Is A Witch.” The smart folks at Facebook evidently can’t recognize a Monty Python tribute, or that there were no ducks involved in the hearings.

Roose and Goldberg blamed The Babylon Bee for the stupidity of Snopes and the gullibility of some online readers (click “expand”):

KR: I’m wondering the extent to which being a satire site — which makes them exempt from Facebook’s fact-checking program — has allowed them to traffic in misinformation under the guise of comedy. Do you think that’s a deliberate strategy?

EG: Well, that’s a great question, because it’s been a big source of controversy for them. They’ve had a few articles that were fact-checked by Snopes and rated “false.” Which The Bee’s writers and editors claim prompted Facebook to threaten them with being demonetized (Facebook denies this). The Bee’s founder, Adam Ford, has claimed that Snopes fact-checked them in ways that were “egregious,” with standards that wouldn’t be applied to, for example, The Onion.

The Bee feels that they’re being targeted unfairly. But Snopes has poked at the fact that their pieces can sometimes be easily mistaken for real news — which might fall on them, not their readers.

Before putting us out of our misery, here was Roose’s last question: “So what I’m taking from this conversation is: The Babylon Bee is not a covert disinformation operation disguised as a right-wing satire site, and is in fact trying to do comedy, but may inadvertently be spreading bad information when people take their stories too seriously?”

What?! Can you imagine this lecturing disapproval about liberal satire sites like The Onion or The Hard Times?