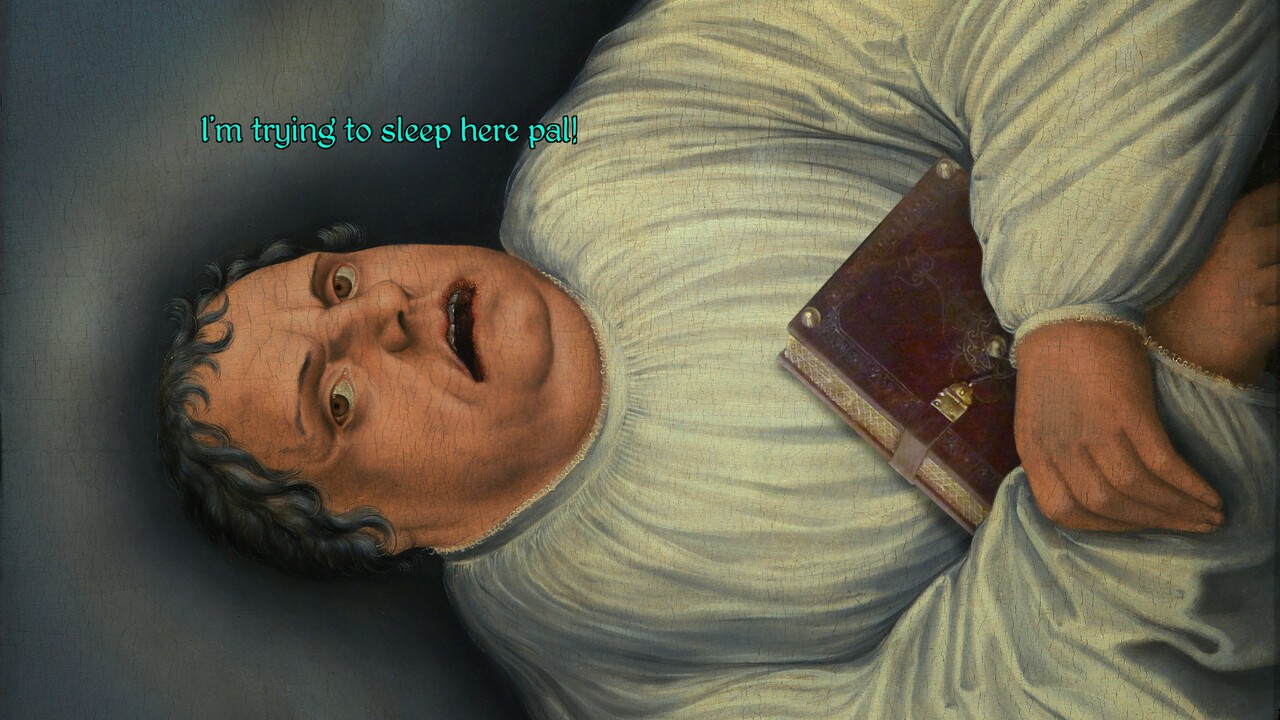 
The Procession to Calvary is easily one of the most unique games we’ve seen in some time. When it was announced for a PS4 release last month, we simply had to know more, and so we got in touch with Joe Richardson, the game’s developer. We asked Joe about the game itself, how it was developed, and the inspiration behind it.

Push Square: For starters, can you briefly tell us what The Procession to Calvary is all about?

Joe Richardson: The Procession to Calvary is a point and click adventure game made from Renaissance art. It is a ‘spiritual successor’ to my previous game, Four Last Things. It features an arguably-somewhat-superfluous story about bringing a tyrant to justice, some head scratching (but not TOO head scratching) puzzles, and an undercurrent of often irreverent, often ridiculous humour.

The Procession to Calvary is easily one of the most unique looking games we’ve seen in a long time. Why did you decide to make a game out of Renaissance art?

I have always been a fan of collage. Before I made games I was an artist/animator, I studied illustration, and I often used collage as a method of disguising the fact that I couldn’t actually draw. When I came to make my first game, The Preposterous Awesomeness of Everything, it seemed like the natural technique to use.

TPAoE was made using photographs – some found images and some I took myself – and while I had originally intended the collage to be very rough, the more I worked on it the more I became obsessed with matching and blending things into a caricature of uniformity. The result was a strange, half-real, half-cartoony, all-creepy aesthetic, that I (and I alone!) think worked rather well.

Anyway, while working on that I had the idea that if I used a similar technique, but with more attractive elements, I could make something really striking. So I did that. And that is this.

Do you have a favourite Renaissance artist?

No, I don’t think I do. When I started making these games I liked Bosch and Bruegel, but that was really all I knew. Now that I have explored so many paintings in so much detail I don’t really think much about the individual artists any more. I like them all. Generally I like older stuff better – things that are a bit janky, where the perspective isn’t quite right and the style is more illustrative. Too much realism makes things boring.

I think it’s also important to mention that I’m not looking at these works with the eye of an educated art critic. I am a cretin and a buffoon. Consequently my interpretation of these work is questionable at best. That could be seen as a negative, but I think it gives me the freedom to add my own life to the characters and the situations I am inventing.

Can you tell us about the process of actually creating the game’s visuals?

I start by collecting a whole bunch of paintings that look usable or interesting or funny or just ‘nice’. I have literally thousands downloaded, organised into folders by type (full characters, portraits, landscapes, cityscapes etc.). One folder is called ‘useful hands’. I then start making backgrounds, selecting images with similar subject, style, and perspective that can be edited together to make a full scene. I make most of the scenes, trying to make coherent links between them (to go from a town square to an interior there needs to be a doorway at both ends, to go from a forest into a cave you need an interior and exterior cave mouth) before I think about adding characters and interaction.

Then I find characters I like the look of and objects that look like they could be interacted with in interesting ways, and add them into the scenes. After that the fun is over and it’s time to start animating things. This can be an extremely slow and often frustrating process, but movement really makes the scenes come to life. I don’t actually start thinking about the puzzles and the story until most of the art and animation is done.

What was the most difficult part of developing The Procession to Calvary? Do you have any development stories you can share?

To be honest my development process is very boring. I’m just a guy sitting at a computer. About a year into development I had a short bout of existential despair that led to a period of almost zero productivity, during which I discovered disc golf on YouTube. Other than that I was pretty much just plodding away, doing my thing. The hard part of being a game developer isn’t making the games, it’s selling them.

Are we right in thinking you can skip puzzles in The Procession to Calvary by murdering characters? Where did this mechanic come from, and can you tell us a bit more about it?

As with most creative decisions in the game it was led by the artwork. The main painting used to build the protagonist is Rembrandt’s portrait of Bellona, goddess of war. I initially put a sword on her belt just for decoration, and to help define her silhouette, but as soon as I started making animations for her I wanted to make her pull it out.

Once the sword was in her hand I immediately realised people would take great pleasure in murdering NPCs. I’m not an adventure game aficionado, but I have played enough in my time to know that quest-giving NPCs can be incredibly annoying – especially if you think you have a solution to a puzzle that they won’t let you explore – so murdering them as a way around this felt like a natural development.

So, yes. You can kill people. But you definitely shouldn’t!

About how long does it take to complete The Procession to Calvary — preferably without having to behead anyone?

A full playthrough could take anything from 20 minutes to 5 or 6 hours, depending on your play style and experience with adventure games. But there are multiple different endings, so if you do finish it in 20 minutes you might want to keep exploring…

Are there any particular games — point and click or otherwise — that inspired you to create The Procession to Calvary?

The Monkey Island games were probably my biggest influence. They were the ones that had the biggest impact on me as a kid, and they are the ones I study and try to emulate in terms of structure and puzzle design now. Generally though I don’t play that many ‘good’ games. I am too old and lazy. I prefer mindless gumpf I can play with friends – I have almost a thousand hours in PlayerUnknown’s Battlegrounds (classic gumpf) and only 5.6 in Hypnospace Outlaw (possibly the ‘best’ game ever made).

What was the comedic inspiration behind The Procession to Calvary? Is it fair to assume that Monty Python was an influence?

I have a lot of different influences when it comes to comedy. Monty Python is definitely one of them – they were a bit before my time, but I watched all the films, and I loved those, and I have been a big fan of pretty much everything Terry Gilliam has done in his career – but they certainly weren’t my biggest influence. I would like to think that dubious accolade falls to Chris Morris or Armando Iannucci, or maybe even Daniel Kitson, but in reality I’m nowhere near smart enough to emulate their work so it’s probably more realistic to say Reeves and Mortimer or South Park.

To round things off, if you had to sum up The Procession to Calvary in a single word, what would it be?

Fun(ny) – because it’s fun, and it’s funny, but it’s also trying a little too hard to be clever!

Huge thanks to Joe Richardson for taking the time to answer our questions.

The Procession to Calvary is set to launch on PS4 this year.

What are your thoughts on The Procession to Calvary? Try not to behead anyone in the comments section below.