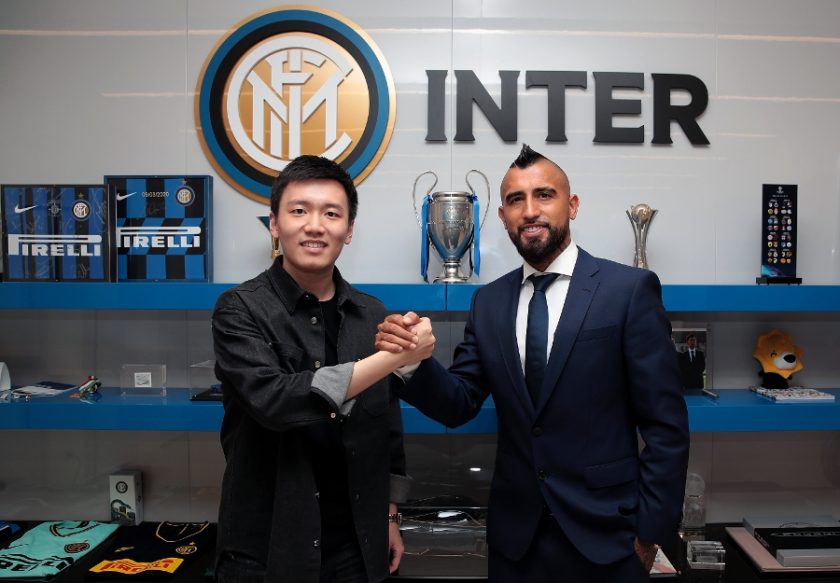 
The Chilean midfielder has agreed to a two-year deal.

Inter Milan have completed the transfer of Arturo Vidal after agreeing on a €1m fee with Barcelona. The Chilean has put pen to paper on a two-year deal at San Siro with an option to extend for another year.

Vidal has been highly-speculated to leave the Nou Camp for weeks while Inter turned out to be the potential destination. The 33-year-old had also been linked with Serie A champions Juventus, with Vidal himself expressing his desire to return to Turin.

“The Chilean midfielder has joined Inter on a permanent deal from FC Barcelona. From today, Vidal will be on the front line for the Nerazzurri, with the same objectives as ever: fighting, giving it his all, and winning.

“He will become the sixth Chilean to play for Inter. The first was Ivan Zamorano, another born fighter. He was followed by David Pizarro, Luis Jimenez, Gary Medel and Alexis Sanchez.

Vidal will now be able to reunite with Antonio Conte under whom he played at Juventus. Conte perhaps was one of the dragging forces behind Vidal’s transfer as the Italian manager wanted him to strengthen the midfield ranks.

The 33-year-old was due to move to San Siro in the summer of 2018 before he changed his decision to sign for Barca.

Although he was initially played down by then-manager Ernesto Valverde, Vidal adapted to the Blaugranas’ squad as the games progressed. Quique Setien also preferred the former Bayern Munich star a lot during his short-lived stint.

During his two-year spell at the Nou Camp, Vidal was able to befriend the star duo, Lionel Messi and Luis Suarez.

Vidal had the chance to leave the Nou Camp in the winter transfer window, but he decided to stay in the end.

After enduring an erratic season last term, Barca decided to offload some of the first-team players with Vidal amongst them.

Inter already boast a well-drilled midfield unit and Vidal’s inclusion would be the icing on the cake for Conte.

Christian Eriksen has been tipped to suffer from the arrival of the Chilean star as the Dan is not favoured by Conte. Inter are also looking to sell the former Tottenham star after just around seven months.

The Nerazzurri are trying to end the hegemony of the Bianconeri in Serie A after ending up second in the table last season.