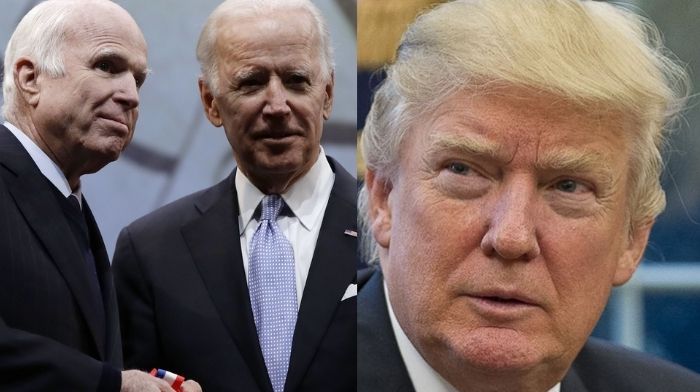 
Mike Murphy, a former aide to the late Senator John McCain (R-AZ), said a Joe Biden win in Arizona was revenge from beyond the grave.

Speaking on MSNBC, Murphy, a GOP strategist, made the remarks before the AP had called the state for Biden.

“I think if we kind of unwind this, a lot of Democrats were looking for a quick knockout in the sunbelt where Biden would take a red state away, particularly Florida, and it didn’t happen,” Murphy argued, noting that Florida and Miami Dade were a shock loss for Biden.

“So the bad news for Biden and for Democratic psychology is the easy break-his-back-tonight win in Florida or Georgia or North Carolina look very unlikely, they’re playing on red state turf,” he continued, adding “there’s one red state left in the sunbelt that I do think is going to flip to Joe Biden, which is Arizona.”

“It could be the revenge of Senator John McCain,” Murphy said flippantly, with seemingly no awareness about the inappropriateness of his comments.

“A lot of Democrats were looking for a quick knockout in the sunbelt, where Biden would take a red state away, particularly Florida, and it didn’t happen,” Mike Murphy says.

Arizona, if it flips for Joe Biden, “could be the revenge of John McCain,” Murphy adds. pic.twitter.com/3tqjgXicaZ

Other social media users echoed the idea that a Biden win in Arizona was McCain’s revenge, including CNN’s Ana Navarro.

Joe Biden is the first Democrat in 24 years to win Arizona. I’d like to imagine it as John McCain getting the last laugh.

It’s like the ghost of John McCain turning down his thumb one last time.

The ghost of John McCain comes back for revenge.

Look: Trump may end losing this election because of his irrational grudge against John McCain. Would be quite a dramatic flourish.

Of course, the fawning media class made this dramatic switch after their behavior towards McCain back in the 2008 presidential race.

The New York Times claimed that the McCain campaign stirred up “racially-tinged attacks” against then-Senator Barack Obama, and alleged that the GOP camp brought race into the discussion in a number of headlines.

The late Democratic Representative John Lewis even went so far as to compare McCain and Sarah Palin to the segregationist George Wallace, saying they were “sowing the seeds of hatred and division,” and “playing with fire.”

Democrats, the media class, and Never Trump Republicans are so willing to use the life of John McCain as their own political weapon, beating President Trump over the head with it.

Even the McCain family themself jumped on the Biden train, with his widow Cindy calling him a “good and honest man,” and joining his advisory board for their transition team. His “The View” co-host daughter Meghan backed Biden as well going into this election.

When will the chattering classes learn that using the legacy of the dead as political footballs is simply inappropriate? Never, it seems.