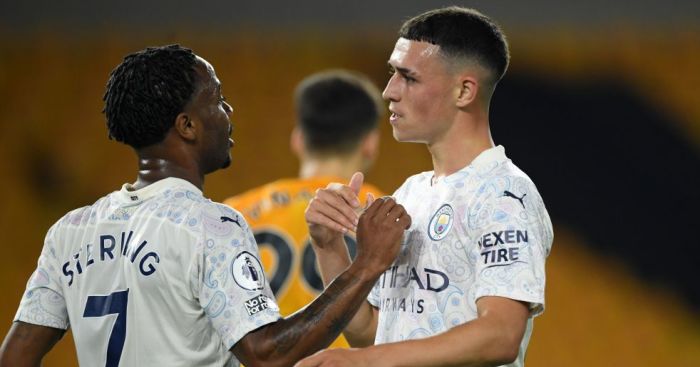 Kevin De Bruyne, Phil Foden and Gabriel Jesus were all on target as Manchester City opened their season with a 3-1 win at Wolves on Monday night.

Pep Guardiola’s men were 2-0 up at the break after a dominant display but had to resist a late fightback from the home side, after Raul Jimenez’s header.

The win was capped late in stoppage time after Jesus was teed up by De Bruyne to earn City all three points.

You can follow how all the action unfolded at Molienux via our Live Centre.

Nathan Ake was handed his City debut for their trip to Molineux, starting alongside John Stones at the heart of the defence.

Guardiola was without Ilkay Gundogan after he tested positive for coronavirus, while summer signing Ferran Torres was on the bench.

De Bruyne started the season as he finished the last one, pulling the strings for the visitors and opening the scoring after 19 minutes.

The midfielder was fouled inside the box by Romain Saiss and blasted the resulting penalty past Rui Patricio.

England midfielder Foden made it 2-0 after 32 minutes when he fired in Raheem Sterling’s pass after a slick City move sliced Wolves open.

The home side finally found their spark in the second period but wasted several chances as Daniel Podence shot wide before chipping a glorious chance over when put through.

But Wolves did make it interesting with 12 minutes to go when Jimenez got on the end of a lovely Podence cross to power home a header from eight yards.

And they missed a chance to draw level in the 87th minute when Willy Boly headed a free-kick over the crossbar.

City wrapped up the points in the fifth minute of stoppage time Jesus’ effort deflected off Conor Coady and left Patricio stranded.

The scoreline meant that a new record of 44 goals in a single round of matches was set – more than any other gameweek since the league turned to 20 teams.