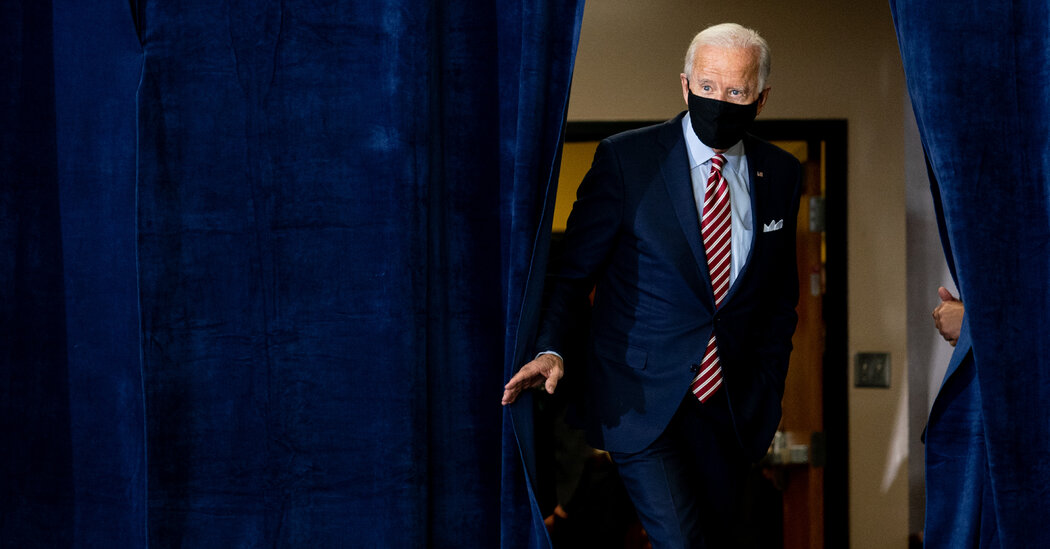 
In July, as the coronavirus pandemic raged, Joseph R. Biden Jr. made one trip to a battleground state. In August, he again visited just one swing state. And on the second weekend in September, less than eight weeks before Election Day, Mr. Biden’s only activity was going to church near his Delaware home.

Mr. Biden’s restraint has spilled over into his campaign operation, which was late to appoint top leaders in key states and embraced a far more cautious approach to in-person engagement than President Trump, and even some other Democratic candidates. While the Trump campaign claims it is knocking on hundreds of thousands of doors a day, the Biden team is relying heavily on TV ads and contacting voters largely through phone calls, text messaging programs and other digital outreach.

That guarded strategy reflects the bet Mr. Biden’s campaign has made for months: that American voters will reward a sober, responsible approach that mirrors the ways the pandemic has upended their own lives, and follows scientific guidance that Mr. Trump almost gleefully flouts.

Yet as Mr. Trump barrels ahead with crowded, risky rallies, some Democrats in battleground states are growing increasingly anxious about the trade-offs Mr. Biden has made. With some polls tightening since the beginning of the summer, they are warning him that virtual events may not be enough to excite voters, and urging him to intensify in-person outreach.

The concern among these Democrats is whether, in closely fought states that may be won on the margins, the Biden campaign is engaging every possible voter with an affirmative case for his candidacy, when the other side simply has more traditional tactics they are willing to use.

“It feels like asymmetric warfare,” said Matt Munsey, the Democratic chair in Northampton County in eastern Pennsylvania, one of the counties Mr. Trump narrowly flipped in 2016, referring to Mr. Biden’s approach versus Mr. Trump’s.

Livestreamed events were “not necessarily reaching people,” Mr. Munsey cautioned. Mr. Biden has begun to accelerate the pace of his travel, and Mr. Munsey praised him for “getting out there more.” But he expressed frustration that Mr. Biden’s in-person events were kept so small: The campaign has been so wary about exceeding crowd limits, he said, that local leaders have complained of not being invited.

Compounding the challenge is an on-the-ground operation that was weak during the primary season and was slow to scale up in the general election. Strapped for cash after the primaries and uncertain about how to campaign amid a national lockdown, the Biden team initially refrained from greatly expanding its staff. It entered the summer without state directors in critical battlegrounds like Michigan, Florida and Pennsylvania, and efforts to establish local operations stretched deep into the summer.

Now Democrats from Florida to Nevada have worried that the team is behind where it should be in engaging some core constituencies, a problem that may also have implications for new voter registrations.

In Erie County, Pa., for instance, local party leaders have been imploring the Biden campaign to have more of a presence on the ground. They became so impatient to begin interacting directly with voters that they took it upon themselves to go from house to house to distribute campaign signs, drop literature and speak with people at a pandemic-acceptable distance.

Only recently has the campaign begun to rev up its field program in the Erie area and across the state, local officials said.

“If you complain as much as I do and you beat on the doors of the national campaign, they’re eventually going to respond to you,” said Ryan Bizzarro, a state representative from the county, a onetime Democratic stronghold that Mr. Trump flipped in 2016.

Beyond the risk of leaving voters feeling overlooked, Mr. Biden’s limited travel schedule provided ammunition to Mr. Trump, who has repeatedly mocked him for rarely straying from his Delaware home. “You need a lot of energy to do this job properly,” Mr. Trump said at a campaign event in Phoenix on Monday, adding that “you can’t be sitting in your basement for four days.”

Democrats have no interest in replicating Mr. Trump’s rallies, which pose health risks and also turn off voters who are alarmed by the dangers of Covid-19. Mr. Biden has been eager to make the race a referendum on Mr. Trump and his stewardship of the pandemic, a game plan that polls generally suggest is working, including with traditionally Republican-leaning constituencies like seniors.

Now flush with cash, the Biden team is active on the airwaves, and on Wednesday announced it would spend more than $65 million on paid advertising in battleground states this week.

Asked if Mr. Biden has been visible enough in Hillsborough County — home to Tampa, Fla., where he traveled on Tuesday — Ione Townsend, the Democratic chair there, replied, “No.”

“But I also don’t want him to have the kind of events that Trump is having, because I think those are superspreader events,” she said ahead of his trip. “In these last few weeks he needs to do more of that kind of stuff that he’s now doing.”

In early May, Mr. Biden also held an event focused on a Tampa audience — a virtual rally riddled with technical glitches. The campaign soon moved away from such efforts in favor of a series of policy rollout speeches as well as online activities, and Mr. Biden devoted considerable time to receiving briefings on the virus and the economy.

“Joe Biden is working to earn every vote with a groundbreaking campaign that meets this moment,” said Andrew Bates, a Biden campaign spokesman. “And he’s doing it in the way he would govern: by putting the well-being of the American families he’d fight for every day in office first.”

In a briefing with reporters earlier this month, Mr. Biden’s campaign manager, Jennifer O’Malley Dillon, said the team had more than 2,500 staff members who were “supporting the organizing across our battleground states,” and had made a $100 million “investment” in on-the-ground organizing.

Still, Mr. Biden has visited Wisconsin only once in 2020, for a one-day trip to Kenosha two weeks ago after the police shooting of Jacob Blake. Until last week, he had made no trips to Michigan since the primary election there in March. He has yet to travel this year to Arizona.

In New Hampshire, where Mr. Biden’s wife, Jill Biden, campaigned on Wednesday, some Democrats have raised alarms as polls show a tightening race in a state Hillary Clinton barely won.

“I’ve been telling them they need to get their signs out,” said State Senator Lou D’Allesandro, a veteran New Hampshire Democrat and early Biden supporter. “We need to be doing more in direct engagement. We are beginning to see that.”

In Ohio, Danny O’Connor, the county recorder in Franklin County, which includes Columbus, urged Mr. Biden’s campaign to “start hitting doors in order to make sure we’re getting as much turnout as we can, because the other side’s out knocking.”

“A Zoom connect or whatever just doesn’t replace standing on someone’s door and asking them to commit to vote and looking them in the eye and telling them why you’re supporting someone for the most important position in the world,” added Mr. O’Connor, who ran unsuccessfully for Congress in 2018.

Rogette Harris, the Democratic chair in Dauphin County, Pa., said the campaign had deployed six staff members about three weeks ago to the central part of the state and planned to open distribution centers in Harrisburg within the next week, where supporters could pick up campaign materials and yard signs.

But Ms. Harris said it was imperative that Mr. Biden and his running mate, Senator Kamala Harris, campaign across Pennsylvania, and not just in the big cities of Philadelphia and Pittsburgh.

“I do think the polls have tightened because of the lack of presence,” she said.

Many party officials say they are confident that Mr. Biden’s strategy is both sensible and effective. Local officials in Wisconsin say they are seeing great enthusiasm for Mr. Biden and expressed confidence that he would win the state in November.

Mary Arnold, the Democratic chair in rural Columbia County, said she heard many pleas for Mr. Biden to come to Wisconsin a few months ago. But recently, she said, people have been more accepting of Mr. Biden’s strategy, including keeping his events small.

“I’m getting this much stronger sense that people respect him for that decision because he doesn’t want to kill people,” she said.

Many of Mr. Biden’s allies said they were content to have Mr. Biden mostly remain at his house in the summer, not wanting to interrupt what they viewed as Mr. Trump’s self-sabotage. Still, in late August, as Mr. Trump intensified his “law and order” message and painted Mr. Biden as a “Trojan horse” of the liberal left, demands among Democrats to see Mr. Biden traveling more and speaking to voters directly reached a fever pitch. Aides in early September previewed a fall strategy that included an escalated travel schedule.

Indeed, this week is one of the busiest the Democratic candidate has had in months, with two speeches in Delaware, a trip to Florida and planned appearances at a CNN town hall on Thursday in his hometown, Scranton, Pa., and in Minnesota on Friday. It follows a schedule last week that included trips to Pennsylvania and Michigan, as well as travel to New York and Shanksville, Pa., to commemorate Sept. 11.

Representative Andy Levin of Michigan had been especially vehement that Mr. Biden should visit Macomb County, a blue-collar region in southeast Michigan that twice voted for Barack Obama before turning to Mr. Trump in 2016 — and last week, Mr. Biden did. Mr. Levin said in an interview this week that he wanted the former vice president to “keep doing just what he’s doing.”

“Every time he appears in public, he demonstrates that he will be the public health president — that he takes the pandemic seriously,” Mr. Levin said. “People can get anxious, I guess, that Trump is holding all these big events and Biden isn’t, and I say, keep on going. Keep on demonstrating that you will not advance your self-interest at the expense of the American people because that is the nub of who Donald Trump is.”