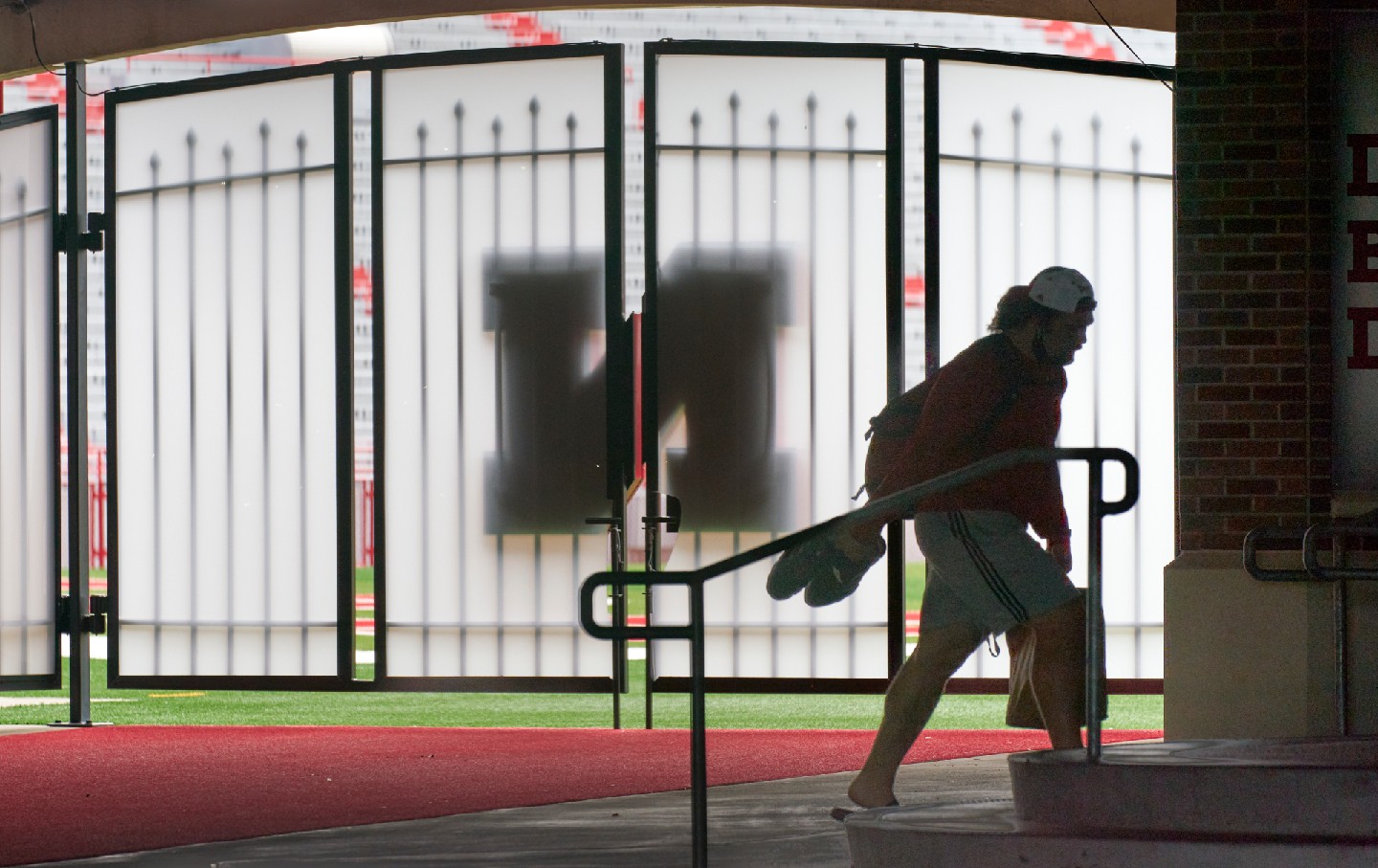 A player at the University of Nebraska, Lincoln, in August 2020. (Nati Harnik / AP)

Justin Fields is one of the great talents in college football. The Ohio State quarterback was supposed to be a leading contender for the Heisman Trophy this season, and the Buckeyes in turn were poised to win a national championship. That all changed last week, when the Big Ten Conference canceled the fall football season because of the continued spread of Covid-19.

Fields, terribly desperate to get on the field and further prove his worth to the NFL, has started a MoveOn petition to get the Big Ten to change their minds. Already amassing more than 250,000 signatures, Fields is building on the #WeWantToPlay hashtag, which college athletes used on Twitter to implore conference leaders not to cancel the 2020 season. So far, two of the Power Five conferences, the Pac-12 and the Big Ten, have done just that.

In his petition, Fields writes:

We, the football players of the Big Ten, together with the fans and supporters of college football, request that the Big Ten Conference immediately reinstate the 2020 football season. Allow Big Ten players/teams to make their own choice as to whether they wish to play or opt out this fall season. Allow Big Ten players/teams who choose to opt out of playing a fall season to do so without penalty or repercussion.… We want to play. We believe that safety protocols have been established and can be maintained to mitigate concerns of exposure to Covid 19. We believe that we should have the right to make decisions about what is best for our health and our future. Don’t let our hard work and sacrifice be in vain. #LetUsPlay!

It’s understandable why Fields is taking this step. He has a lucrative NFL future ahead of him, and losing a year could harm his development and prospects. His plea also speaks to the frustration that many college athletes feel over the fact that they do not have a say in what will happen this upcoming season. They have no players’ association, no seat at the table, and therefore no agency about this decision that will so thoroughly affect their lives.

On one side of this fight are medical professionals and school presidents; on the other side are coaches, players, and many parents—some of whom are traveling to Big Ten headquarters in Illinois to protest the decision. The doctors advising on this decision focused on myocarditis, an inflammation of the heart muscle, that can be an aftereffect of Covid-19. It was found to be present in five to 15 Big-Ten athletes who contracted Covid-19 during the off-season. This is a rare and potentially deadly condition—it can kill you if the heart is subjected to strenuous exertion.

Canceling the season will cost millions if not billions of dollars, but the medical experts won out. Meanwhile, this entire ordeal has exposed a reality that athletes understand all too well. They are not so-called “student athletes.” They are minor league players taking their shot at the National Football League. Many have no problem if the entire campus is learning remotely if it means they get to play, even if that means carrying a risk that other students do not have to shoulder. That’s just par for the course. Preventing them from taking the field is also preventing them from pursuing an opportunity to make the major league—something that only a minuscule fraction will actually achieve.

The desire to get back on the field no matter the risk is understandable, because football itself holds the element of risk in every play. Just this past week, the NFL celebrated the return of quarterback Alex Smith, two years after he almost died and nearly lost his leg from a vicious hit during a game. It’s been framed as an inspirational story, with Smith saying, “It’s amazing to return to do something you love.” Players don’t dwell on the dangers, because if they did so, they might never walk onto the field.

This is precisely why you need medical professionals to step in and assess the risks. It exposes the worst about college football that the other conferences that include schools already experiencing Covid breakouts as students return to campus have no centralized mechanism for shutting it all down, and instead cherry-pick the medical information they want to hear so they can keep the trains running. It’s the Trumpian triumph of the negation of science, and young people whose goal is to play by any means necessary will pay the price.

Make no mistake about it: There is no college football for Ohio State for two reasons. One is because of the ways in which the Trump administration has mishandled the pandemic response at the cost of thousands of lives. The other is because this country—thanks to a bipartisan consensus forged over a generation—has no kind of social safety net to effectively keep people at home, save people’s jobs, and keep businesses afloat until the worst has passed. If we obfuscate that truth, we lose clarity as to where the responsibility for this calamity lies, and we doom ourselves to never seeing it come under any semblance of control. You can feel for players like Justin Fields and still recognize this truth.