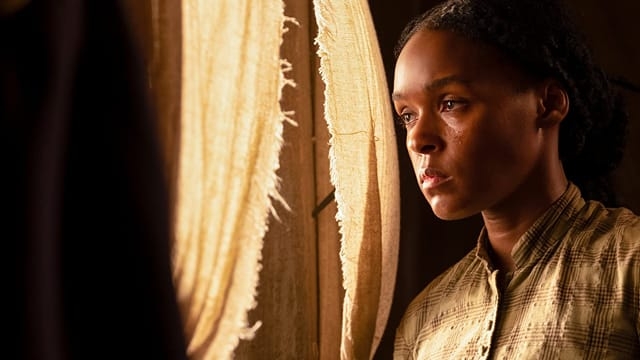 Writer/directors Gerard Bush and Christopher Renz make their jump from short features into the deep waters of a major motion picture that explores what has and has not changed in the racial divide in the United States. Unfortunately, when the three rivers of drama, horror, and social statement converge, it creates a whirlpool that ends up drowning the novice feature-length writers.

Veronica Henley (Janelle Monáe) is a highly successful Black author, recognized as an important voice in the movement for equality. Because of this, she garners a lot of attention, not all of which is positive. This leads to her kidnapping. But rather than being held for ransom, she is held captive in the past. Veronica must find a way to escape this fate while helping others also sentenced to slavery for merely being successful, outspoken Black persons.

The theme of these people being “put in their place” by removing them to slavery is not lost. In fact, it is over-emphasized, and this affects the quality of the story. It answers every cliché, as though checking them off a list, watering down the message. This, combined with a disjointedness that makes the film feel more like a series of related shorts strung together by a common subject, makes it difficult to watch despite the important narrative.

Despite the fine quality of actors in such veterans as Janelle Monáe and Jena Malone, the direction turns them into caricatures. Monáe tries hard to salvage this, which is the only thing that keeps the character from losing the audience. Her skill makes Veronica the only role that isn’t cartoonish. The brightest performance comes from Gabourey Sidibe as Dawn. As usual, she carries a screen presence that states, “This is who I am,” in such a manner that the audience can never tell if she is acting or just playing herself.

The principal saving grace is the cinematography, which is elegant and beautiful from the opening moment right up through the bits of action in the credits. There is exceptional use of color, light, and shadow, and angles that tell the story better than the actual tale itself. In addition, the background soundtrack speaks loudly to the visuals, setting the mood for each scene.

Antebellum is an ambitious film that tries too hard to be proud of itself – much like some of the people who owned the plantations during this period. But also like the mansions associated with the name, there are just too many rooms here that are not used as they could be, and this shuts the door on what could have been a meaningful opportunity.