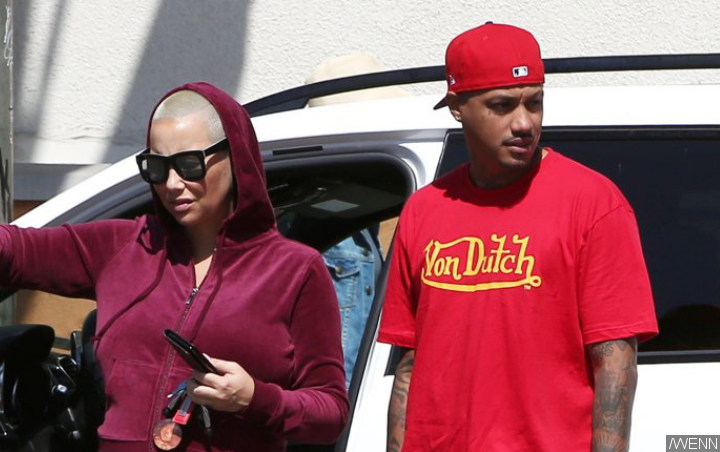 AceShowbiz –
Is Amber Rose a married woman now? The 36-year-old model makes fans wonder if she is secretly married to her boyfriend Alexander Edwards a.k.a. AE after she calls him with an eyebrow-raising label in her birthday shout-out for him in an Instagram post.

Posting on Monday, September 21 a goofy picture featuring herself, AE and her two kids in honor of his birthday, Amber wrote in the caption, “Happy Birthday Baby! Thank you for loving us so much and being the Amazing father and husband that you are!” She went on saying, “We are so grateful to have you.”

“This is ur year! Ur Talent, Heart, personality,Smile and Dance moves won me over 2 years ago,” she continued gushing. “You Blessed me with A beautiful lil baby boy Slash and became the Coolest stepdad in the World for my Beautiful big boy Bash and for that I am forever thankful. Now let’s enjoy ur Bday like never before! I love you Sweetheart.”

Fans were surprised with the label as one wrote in the comment section, “I didn’t y’all got married ! congrats!” Another fan added, “Y’all married? Amber call me,” while someone else commented, “I read ‘Husband’ and paused like OOP.”

Further fueling the speculations, Amber also posted a video on Instagram Stories that saw her calling Alexander’s mom “mother-in-law.” However, it should be noted that it didn’t seem that Amber sported a new bling on her finger.

Prior to this, Amber also referred to AE, with whom she welcomed son Slash Electric Alexander Edwards in October of 2019, as her “husband.” In her tribute post for Kobe Bryant and his daughter, who both died in a helicopter crash back in January, Amber wrote, “As a mother I’m so devastated for Vanessa, her Daughters and their family. I sat and thought about my life without my Sons, my husband Alexander and my Family and literally couldn’t hold back my tears all day.”


‘Good Bones’ Star Mina Starsiak Gets Candid About Postpartum Experience: I Have to Wear Diaper