The Duchess was first seen wearing the necklace to the annual National Portrait Gallery gala in 2014. The necklace was a wedding gift to Princess Elizabeth in 1947. We learn more from The Court Jeweller:

The necklace in question was a wedding gift to the then-Princess Elizabeth from the Nizam of Hyderabad in 1947. Asaf Jah VII was the ruler (or Nizam) of Hyderabad, which is located in the south-central part of the sub-continent of India (which was then under British colonial rule). He was one of the richest men in the world, so he could afford to give the princess a truly spectacular wedding gift. He followed through by fulfilling most jewel-lovers’ greatest dream: he left instructions with Cartier to let the princess pick anything from their existing stock for her present.

Here you see HM wearing the necklace in October 1955 as she arrives at the Royal Performance of ‘To Catch A Thief’ at the Odeon Cinema, Leicester.
Embed from Getty Images
And here is a studio portrait of HM, also done in 1955. Her Majesty’s Jewel Vault notes, “As with many of her necklaces, the Queen did eventually shorten the chain to suit her tastes, and she still wears it from time to time today.” (You might also recognize the Wedding Gift Bracelet on her right wrist.)
Embed from Getty Images
Another view of the Duchess wearing the necklace in 2014. We return to The Court Jeweller.

The necklace, which was made by Cartier in 1935, is especially intricate, featuring more geometric diamonds nestled in the abstract floral design. Hugh Roberts describes it as follows: “The pavé-set centre with detachable double-drop pendant incorporating 13 emerald-cut diamonds and a pear-shaped drop; the chain of 38 brilliant-cut open-back collets with an elongated oval brilliant-set snap” [3]. The piece had actually been previously owned; it had been sold in 1936, and then reacquired by Cartier from the buyer the following year. Below you see HM wearing the necklace in a photo used for the cover of Elizabeth: Reigning in Style, a book studying the Queen’s wardrobe over the decades. The Duchess wore the necklace again last year for the annual diplomatic reception at Buckingham Palace. Kate paired it with an Alexander McQueen gown and the Lover’s Knot tiara. Here is a side-by-side view of the necklace framed by two different dresses. Our next piece has only been seen once on the Duchess. That was when the Cambridges were on their way to the 2017 diplomatic reception. It is one of the Queen’s collet styles, described by Her Majesty’s Jewel Vault as a “basic necklace with single round diamonds (of considerable size on their own) in a single row.” Below, a little bit better look at the necklace and one of Diana’s Collingwood pearl drop earrings.

Below, HM wearing the necklace during a 2010 state visit to the United Arab Emirates. More from Her Majesty’s Jewel Vault.

Any good royal collection has at least one diamond collet necklace…  Queen Mary was a huge fan, often piling on multiple necklaces so as to create almost a diamond turtleneck for herself. And one more view of the Duchess. Next on our list, the Ruby and Diamond Floral Bandeau, worn in July 2017 for the Spain state dinner. 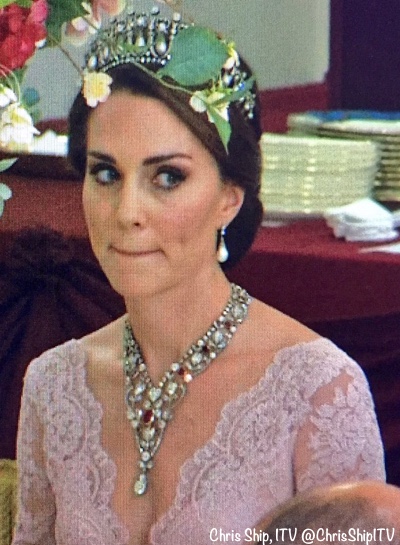 There was just a glimpse of it as the Cambridges headed to the dinner. More about the glittering piece from Her Majesty’s Jewel Vault:

This necklace was one of the Queen’s wedding gifts from her parents, King George VI and Queen Elizabeth. It was part of the Greville bequest, the collection of jewelry left to Queen Elizabeth by the Hon. Mrs. Ronald Greville when she died. Mrs. Greville purchased the necklace from Boucheron in 1907.

You can see the necklace in this display of wedding gifts given to Princess Elizabeth and Prince Philip at St James’ Palace in 1947.
Embed from Getty Images

Below, HM wearing the necklace in August 2018 for a dinner with Commonwealth Heads of Government. From left to right: Prince Charles, HM, Commonwealth Secretary-General Patricia Scotland, and Prime Minister Theresa May. A better view of the necklace. Back to Her Majesty’s Jewel Vault for more details about the piece.

The intricate piece is set in silver and gold and features single rubies between diamond flowers. It’s an interesting bandeau format, a deep v-shape culminating in a diamond pendant. The Queen did shorten it, as she tends to do with necklaces…

Another view of HM at the Commonwealth dinner and the Duchess, wearing a Marchesa gown with a deep neckline showcasing the necklace.

Hopefully, we’ll see this piece again at a function where there is more access for a photographer.

We now look at the Four Row Pearl Choker, worn for a private dinner at Windsor Castle in 2017, celebrating the Queen and Prince Philip’s 70th wedding anniversary in 2017.

We have more from The Court Jeweller:

…one of the lesser-seen necklaces in her collection is the four-stranded pearl choker necklace with an unusual diamond clasp.

Leslie Field writes that the necklace was made “from pearls in [the Queen’s] collection.” The pearls were reportedly a gift from the Japanese government, possibly acquired during the 1970s, when she made a state visit to that nation. The necklace was constructed by Garrard. Field also speculates that the clasp of the necklace is large enough to accommodate an additional strand of pearls, should the Queen ever choose to make this a five-stranded choker.

Here you see HM wearing the piece to a 1983 dinner in Bangladesh.
Embed from Getty Images

The necklace was loaned to Diana, Princess of Wales, for a 1982 banquet at Hampton Court Palace (photo here).  Below, another view of the Duchess wearing the piece.
Embed from Getty Images
Our final item is Queen Alexandra’s Wedding Necklace. The Duchess wore it to the October 2018 Netherlands state dinner, also the first time we saw the Duchess wearing the Royal Family Order. The necklace was part of a parure (a term referring to a jewelry set designed to be worn together) given by Prince Albert to Princess Alexandra of Denmark in 1863 on the occasion of their wedding. Prince Albert was the future King Edward VII. The necklace features “eight large pearls surrounded by diamonds and connected by diamond festoons with drop pearls hanging from the central clusters, and was a favorite of Queen Elizabeth the Queen Mother,” according to The Royal Order of Splendor. Her Majesty’s Jewel Vault reports “Queen Mary gave the necklace to Queen Elizabeth The Queen Mother, and she wore it constantly.” Below, The Queen Mother is seen wearing it in 1985 for an engagement celebrating her 85th birthday.
Embed from Getty Images

Below, two more views of the Duchess in the piece. And that wraps up our look at necklaces HM has loaned the Duchess. I would love to know what you think of them.

In case you missed our previous reports, Part One covered Kate’s Borrowed Brooches.

In Part Two we looked at Borrowed Bracelets worn by the Duchess.

Part Three focused on the earrings loaned to the Duchess.

As ever, enormous thanks to The Court Jeweller and the Royal Order of Sartorial Splendor/Her Majesty’s Jewel Vault for their work documenting the royal jewel chests.