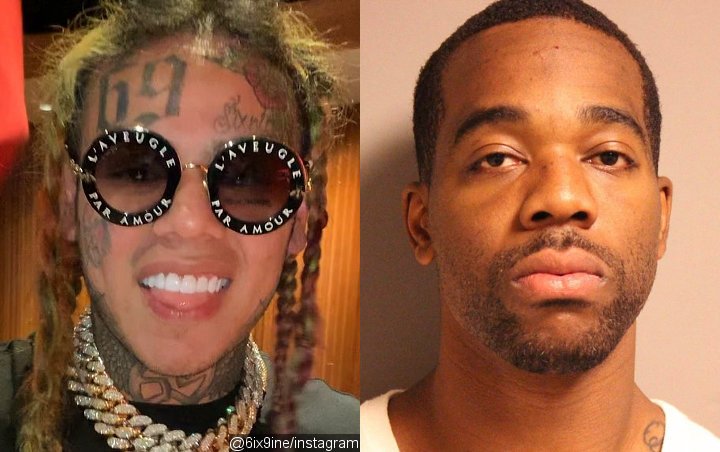 
Anthony ‘Harv’ Ellison, who is the ‘TROLLZ’ rapper’s former fellow gang member in the Nine Trey Bloods, gets the hefty sentence for racketeering, kidnapping and assault charges.

AceShowbiz –
Tekashi69 a.k.a. 6ix9ine‘s kidnapper Anthony “Harv” Ellison has been sentenced in a New York federal court after the rapper snitched on him. The member of the Nine Trey Bloods, who helped kidnap the New York City-born star in July 2018, got 24 years in prison for his crimes.

Ellison got the harsh sentence for racketeering, kidnapping and assault charges which he was convicted for last October. In the court, he said prior to his sentencing, “I’m not an angel. But I’m not a monster either.”

It apparently didn’t budge Judge Paul Engelmayer, who presided over the case, as he said of Ellison’s involvement with the gang, “This was not a book club that you chose to affiliate with.” He noted, “The gang inspired fear with shooting, including in Manhattan.”

The judge went on describing Ellison’s crimes, “Snow Billy was shot in the head. You brought a gun to a house and threatened Nine Trey members whose loyalty you had begun to doubt. You participated in a fight at the LAX airport on Nine Trey’s behalf.” He continued, “You cut Mark Hovde’s face. You were in Manhattan, on a date with Ms. Ramirez – but rushed to Smurf Village. You bailed on your date and stalked Mark Hovde, you slashed his face — 300 stitches.”

While he called his crimes “horrific,” the judge said, “I think 360 months is not necessary.” He then announced Ellison’s sentence, “I find that a sentence below this can accomplish what it must. Mr. Ellison, I sentence you to 24 years, followed by five years of supervised release. I hope when you get out you are not tempted to return to crime. The Department of Probation will have its eyes on you.”

Acting U.S. Attorney for the Southern District of New York Audrey Strauss reacted to the sentence, “Anthony Ellison was a high-ranking member of the Nine Trey Gangsta Bloods, a violent gang that wreaked havoc across New York City, and he was convicted of racketeering, kidnapping, and a violent assault with a dangerous weapon. Now, thanks to the outstanding work of our partners at the NYPD, HSI, and ATF, he will spend the next 24 years in federal prison.”

6ix9ine himself was sentenced to two years in prison in the racketeering case after reaching a plea deal. He served only 13 months in prison, being released early from prison and into home confinement in April. His home confinement ended on August 1.